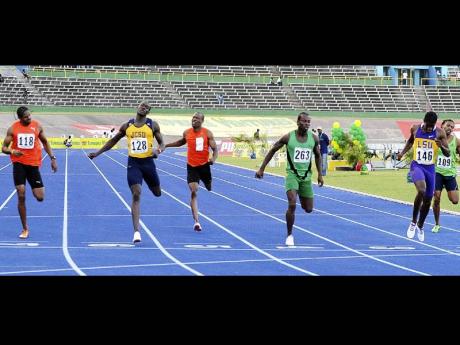 When IAAF World Championships in Athletics medal prospect Jermaine Gonzales crossed the finish line in fourth position in the men's 400m finals at the Jamaica Athletics Administrative Association/Supreme Ventures Limited National Senior Championships at the National Stadium on Sunday night, many inside the venue feared the worst.

What did this mean for the Racers Track Club star's IAAF World Championships in Athletics ambitions? Would the fastest Jamaican ever over the distance not get a chance to represent the country at the August 27-September 4 meet?

Fourth was, however, enough for the national record holder to secure his spot at the World Championships as second-place finisher Leford Green only ran the 400m finals for a spot on the 4x400m relay squad, having already qualified for his pet event - the 400m hurdles - which he will be focusing on in Daegu.

Only 'A' standard Jamaican

Add to that the fact that Gonzales is the only Jamaican with an 'A' standard qualification time so far this season.

Gonzales overcame a stomach ailment - a double episode of vomiting and a general lack of fitness - to post 45.59 seconds in the final, some way off his 45.07 season best and 44.40 personal best quality.

The event was won by Riker Hylton, in 45.30, with Leford Green finishing second in 45.46, the same time registered by third-place finisher Lansford Spence.

"I mean, I knew it was always going to be tough for me to come here and run three races in four days, so I went out there and I put everything on the track. I did minor surgery on my knee and missed about six months, so my fitness isn't where it's supposed to be at this stage and that's why I looked like this today," Gonzales explained after the final.

"I'm just happy I managed to come fourth because I know that Leford isn't going to run the flat 400m, and I already have the 'A' qualifying standard, so it's just to get back to the drawing board, put some work in and get the fitness up where it needs to be.

"It's been up and down for me for the whole trials; the first day I ran and had problems with my stomach and actually threw up in the heats and semi-finals. It's a whole lot of stress and pressure on me, but I'm the kind of person that doesn't really find excuses, so I just went out there and gave it my best," Gonzales confirmed, when asked about his reported illness during the meet.

However, with the World Championships some two months away, the Bert Cameron-conditioned athlete isn't too worried about his form at this point. As a matter of fact, 'Gonz' is pretty certain that he could dip below 45 seconds this season, after a little rest.

"I think I'm in 44 seconds shape right now. If I should rest for a week and run just one 400m I would definitely go 44 seconds, but to do the rounds and then run 44 seconds, no, I'm not at that level of fitness right now," said Gonzales. "But I'm not worried too much, I have two months to get ready and get in some work and hopefully that would be enough time for me."