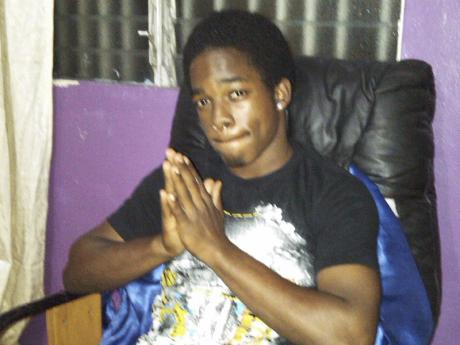 WESTERN BUREAU:Doctors at the Kingston Public Hospital (KPH) worked hard to save 17-year-old Khajeel Mais' life last Friday night, and when nothing seemed to be working, one of the medics held the Kingston College sixth-form student and prayed.

Mais' life was taken from him, his parents, family members and schoolmates Friday night by the angry driver of a black/blue BMW X5 whose sport utility vehicle (SUV) had been hit by a taxi in which the 17-year old was a passenger.

The shooting occurred about 7 p.m. along Fairfax Avenue in Havendale, St Andrew, a few metres from where the young man resided. The angry X5 driver, reportedly upset that his vehicle had been struck, retaliated by pulling up alongside the taxi and firing two shots inside it, one of which went through Mais' head.

The driver then sped off.

"Please help us find this person before he fixes his car. My nephew was 17, on his way to a past students' fête at Meadowbrook High School. Please circulate this and bring this man to justice," was the note sent out via BlackBerry Messenger on Saturday morning as Mais' aunt, Gaudia Chevannes-Aquart, worked hard at finding her nephew's killer.

The student was on his way to a fête at his alma mater - Meadowbrook High - said his aunt, who added that he had badgered his mom into letting him go. "He begged his mother to allow him to attend because he so desperately wanted to attend," she choked up, finding it difficult to speak.

Khajeel Mais, described as a good child, was involved in community and school activities. "I couldn't have wanted a better son. He was loving, caring and family-oriented. He was my son and my friend," said his tearful mother, Allana Chevannes-Mais.

This is the second death to rock the family in the last year, having recently buried their uncle, Dr Barry Chevannes, late professor of the University of the West Indies, Mona.

Up to press time, the police were still scouring the capital city for the driver of the X5, whom they have asked to turn himself in.

"We will not stop searching until we find him," said Chevannes-Aquart.