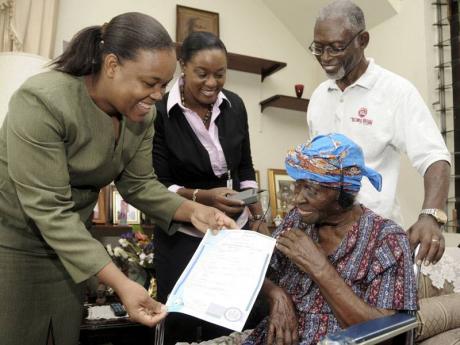 After being blessed to live 113 years, Lillian Anderson said her last goodbye on Saturday morning at the Kingston Public Hospital (KPH).

Raymond Anderson, her only child, told The Gleaner he noticed that she was not eating and she was very sleepy. She was then taken to the KPH on Tuesday.

"I am just happy that she has lived a good life and that she is gone on to a better place, the impact she had on my life was remarkable and I will never forget that," he said.

Anderson also expressed regret for not being with her at the time of her death as he would have wanted to say his last goodbye.

"I'm really saddened that I was not there to see her take her last breaths, I would have wanted to be there at her bedside," he said.

Anderson said she spent half of last Sunday praying and giving God thanks for his blessing towards her. Her level of faith and spirituality was what he admired most about his mother and he is moved by her commitment to God.

"I know I am going to see her one day. She lived an exemplary life and we take hope in the fact that we hope to see her again in the by and by," he said.