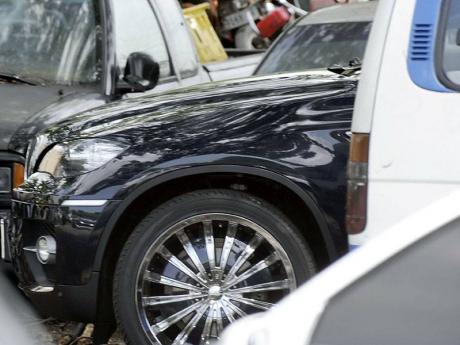 This dark BMW X6, which was at a holding area at the Constant Spring Police Station in St Andrew, is believed to be the vehicle that was involved in the shooting of the schoolboy. - Norman Grindley/Chief Photographer

The senior police officer whose home was raided by lawmen yesterday has denied any relationship with the suspect fingered in the killing of 17-year-old Khajeel Mais, sources close to The Gleaner say.

Allegations are that the senior police officer kept information on the case from his colleagues, raising suspicions that he might have been a close associate of the BMW X6 driver who is believed to have been involved in the incident which led to the shooting death of the Kingston College student last Friday night along Fairfax Avenue in Havendale.

The Gleaner understands that the police were looking for two licensed firearms believed to belong to the X6 driver. They also feel that the senior police officer might have tipped off the suspect who reportedly fled the island last Saturday for the United States.

When the Gleaner called the decorated lawman, who is well respected by his peers, there was no answer and his voicemail was full.

This latest development comes as the police increase their aggressive search into finding Mais'killer. On Tuesday night, police also raided the home of the suspect, seizing two vehicles, one of which is believed to have been involved in the incident.

The raid took place between 10:30 p.m. and 12:30 a.m. in Belgrade Loop, upper St Andrew. No weapons were found at the home, but the man's family was questioned. During Tuesday night's operations, two men were also arrested and charged for possession of marijuana. They have since been released on station bail.

The seized X6 is still being processed by the police.

Reports are that Mais was a passenger in a taxi travelling along Fairfax Avenue en route to a fête at his former school, Meadowbrook High, when the cab bumped into the BMW X6.

The driver of the X6 reportedly became angry and retaliated by blocking the road and firing wildly into the taxi. When the taxi driver realised he was under attack, he turned his vehicle around and headed in the opposite direction, but could not outpace the luxury SUV, whose driver shot out his back window, hitting the teenager in the head.

On Wednesday Mais' mother, Allana Chevannes-Mais, said there would be no closure for her until her son's killer was brought to justice.

"I don't know when I will ever stop crying. His death feels like a full stop in my life," said the mother of three, who since last Friday night has been fighting to come to grips with the loss of her son.