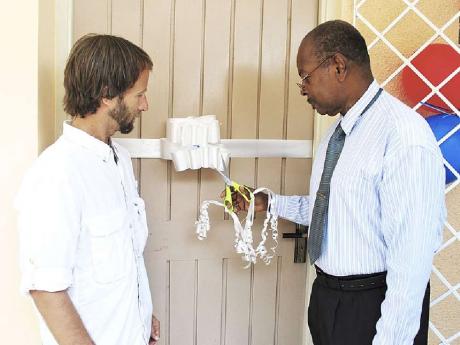 Sheffield All-Age School in Westmoreland has received a fully furnished computer lab, courtesy of Afro-Caribbean Technology Exchange. The lab was a five-year journey that was challenged by the relocation of the school and electricity supply.

"We can now use these computers and other equipment to assist students in learning; teachers in teaching and the community members to learn more about the environment, and just simply increase their knowledge base," said Vice-Principal Jean Manning.

Today, the school has 15 laptops for the teachers, and 25 new desktops computers, projectors and digital cameras valued at a cost of US$63,000 (J$5.4 million) for its 470 students.

James Burke, executive director of the Washington, United States-based Afro-Caribbean Technology Exchange, attended the handover ceremony. He was also accompanied by students from middle and high schools in Washington, as well as some parents.

Burke explained that he was in Jamaica five years ago in search of a project. He was chauffeured around by a taxi operator, free of cost, to communities in Hanover and Westmoreland. He eventually met former principal of Sheffield All-Age School, Samuel Spragg, who gave him the ideas for the computer lab.

Over the years, three teachers from Sheffield Primary visited the US as part of an exchange programme, as part of Afro-Caribbean's three-pronged approach that includes, cultural exchange, training and the provision of the gifts.

"Doing development work is more than just dropping off gifts to a school and leaving feeling good about it," Burke said. "It is important to let teachers and students understand the importance of the use of technology in a competitive world."

Afro-Caribbean Technology Exchange is an international non-profit educational organisation dedicated to fostering greater access to skills and equipment in technology for women, teachers, and students of the Afro-Caribbean Diaspora. The hope of this organisation is to forge a positive cross-cultural bridge between Afro-Caribbean and American participants.