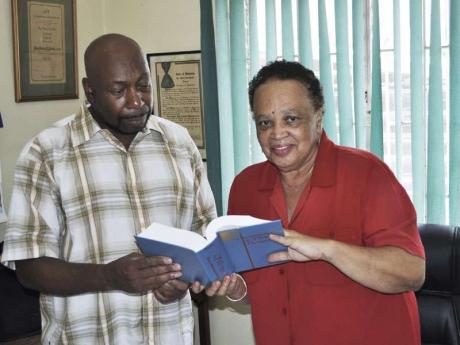 A riveting and engaging new Anglican hymnal designed for liturgical worship in churches across the Caribbean has just been released, and early reactions to this compilation suggest that the publication is destined to be a runaway hit among church congregations in the region.

International reggae icons Peter Tosh and Ernie Smith are included in the hymnal. So too are other Jamaican musical luminaries Noel Dexter, Father Richard Ho Lung, Rev Easton Lee and the late Professor Barry Chevannes. Hypnotic gems like By the Rivers of Babylon (Edward B Henry) are bound to breathe new life into the musical ministry of Anglican churches from Bermuda and the Bahamas to Barbados and Barbuda.

This exciting new hymnal is simply called the CPWI Hymnal (Church in the Province of the West Indies). It replaces the almost over-used and now weary institution, Hymns Ancient & Modern (A&M) that was first introduced in 1861. The CPWI hymnal successfully attempts to combine sedate, old favourite hymns with an astonishing repertoire of lyrically and rhythmically mesmerising songs by Caribbean authors and composers. Popular songs like Joy to the World, The First Noel and, perhaps, the lesser known but equally enchanting Hushed Was The Evening hymn were never in the A&M but are now included in CPWI, alongside hundreds of other soul-inspiring treasures. In a few cases, the words of old hymns have been altered to reflect the cultural realities of the Caribbean region and for some old favourites, tunes have been updated in accordance with popular congregational usage. A section with choruses is also a much welcomed annex to the book, as are a hearty chunk of Negro spirituals and contemporary gospel songs.

Based on the studiously meticulous selection of the beautiful hymns that cover a span of hundreds of years, various cultures and all church occasions and church feasts, it is clear that a tremendous amount of tedious and thoughtful work was invested in creating this landmark hymnal. And with all its musical diversity, the CPWI is wisely anchored in the cultures of the Caribbean.

The all-important connection between music and religion in the Caribbean was not lost on the Archbishop of the West Indies the Most Rev John Holder who, in a message to launch the new hymnal said that the music used in worship in the Caribbean should speak to the experiences of the region's peoples.

This view was reiterated by celebrated Jamaican organist at the Rutgers Church in New York City George Davey who had this to say on the new hymnal. "It is thrilling to learn of the birth of the CPWI hymnal. Church is a place where many look forward to the opportunity to celebrate their joy and to soothe their pain. Hymns and songs aid in this expression, and they should not only be relevant to the congregation, but in a style and language that the local congregation can understand," he said, beaming with pride. One of his favourites is I Come to the Cross like a Small Boat, sailing with words by Dennis Scott and music by Noel Dexter.

Palone Williams, organist at St George's Parish Church in Savanna-la-Mar for more than 45 years is delighted with the book and she started using it exclusively with her choir and congregation on Sunday, July 10. Trevor Beckford, choir director and pipe organist at the Cathedral of St Jago de la Vega in Spanish Town for 50 years, is equally thrilled. He said the book is modern, interesting and remarkably comprehensive, and is already in use at the Cathedral. He, however, admits that he will miss the notation of dynamics (indicators of the relative intensity or volume of a musical line), a helpful feature for choral work that is widely used in the old book that is absent from the new. It is of interest to note that neither the Methodist nor the Baptist hymnals carry such notations.

The director of music at St Paul's Cathedral in London, one of the world's high altars of hymnody refrained from comment on the growing excitement for the CPWI. And a visible casualty of the transition from old school to new is the English national anthem, God Save our Gracious Queen.

A standout alteration in the hymnal is the hymn 707, All Things Bright and Beautiful. The new words by Ronald Jones speak eloquently to the Caribbean, and this new version is rapidly gaining momentum even outside the region. The refrain remains the same: All things bright and beautiful, all creatures great and small, but the verses are painted in Caribbean pastels.

The mangoes in the summer

Guineps and plums and guavas

Are gifts for every child

Some of the standout Jamaican songs, though new to the hymnal, are well known to various denominations across the Caribbean. The beloved Christmas carol - Sing de Chorus Clap Yuh Han, (#85) - for example, was popularised from as early as the late 1970s through the University Singers at Mona by way of their Christmas Carols by Candlelight service and their islandwide tours. And Ernie Smith's All for Jesus (#245) was a charted hit single that attracted widespread radio play in 1974, long before it entered the hallowed domain of the CPWI hymnal. And Jah is My Keepa, (#229), a Peter Tosh composition with arrangement by Audley Davidson, one of the organists at St Andrew Parish Church in Kingston, is bound to make Caribbean congregations rock.

The CPWI contains a fountain 852 beautiful songs and it is now the official hymnal of all eight Anglican Dioceses in the Province of the West Indies. But while the compilation was developed by the Anglicans, the CPWI hymnal is indeed suitable for use by nearly all denominations, and for all occasions of public and personal devotion.

The hymnal is available in leading book shops islandwide and through Anglican churches across the Caribbean.

Dave Rodney is a New York-based marketing consultant and author of 'Contemporary Musicians and their Music-Usher'.