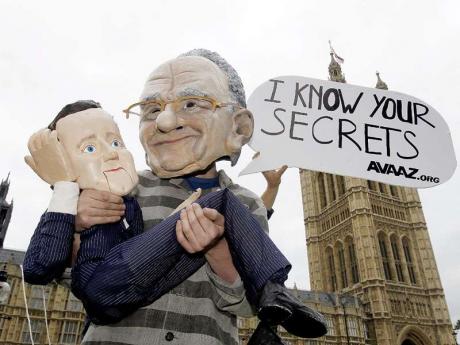 A demonstrator wearing an effigy of Rupert Murdoch holds a puppet of Britain's Prime Minister David Cameron in front of Parliament in London last Wednesday. - AP

At the end of the week, radioactivity from Britain's nuclear-level press scandal, which had already resulted in the shutdown of the 168-year-old News of the World newspaper, had spread to the United States where media mogul and sensation-monger Rupert Murdoch's Fox News network has considerable sway.

The Federal Bureau of Investigation (FBI) in New York had opened a preliminary inquiry into allegations that Murdoch's News Corporation had sought to gain access to the phone records of 9/11 victims. In Britain, it has been proven that Murdoch's News of the World had hacked into people's phone records, most dastardly and repulsively that of 13-year-old murdered teenager Milly Dowler. The newspaper hacked into the little girl's voicemail, deleted voice messages, giving her parents the false hope she was still alive while being able to hear any juicy messages left for her.

It was this revelation which evoked a national outrage and turned Rupert Murdoch into a national pariah. It had been known for some time that News of the World, which had the largest Sunday circulation of 2.8 million, had been hacking into the phones of celebrities and politicians, but they were seen as fair game.

News of the World was 'outed' by another section of the media, the highly respected Guardian newspaper, which had been on its trail for several years. In 2009, the Guardian claimed that News of the World had hacked into the phones of up to 3,000 celebrities, politicians and sports stars. A former editor for the paper, Andy Coulson, who was communications adviser to British Prime Minister David Cameron, has been arrested, as was royal editor Clive Goodman before him.

Disturbingly, too, it has also been revealed that News of the World bribed the police to give them information and even had royal guards on their payroll to get information on the royal family. The News of the World, which was known as the 'News of the Screws', was the epitome of sleaze, salaciousness and scandal-mongering. It vividly illustrated the kind of 'journalism' which represented the character of its right-wing founder, Rupert Murdoch.

But the last two weeks represent a dramatic reversal of fortune for a man who had been become accustomed to getting his way and doing whatever he pleases. He had to back off from his dream of owning 100 per cent of British Sky Broadcasting (BSkyB) after being pressured by British parliamentarians and others to abandon his planned 61 per cent acquisition of the remaining shares, a deal worth US$12 billion. Also, his buddy, Cameron, was forced to go to Parliament late last week to announce a public inquiry into the phone-hacking scandal, as well as into the whole operation of the British media.

And Cameron was ominous. "And let me say this. The people involved, whether they were directly responsible for wrongdoing, sanctioned it, covered it up, however high or low, they must not only be brought to justice, they must have no future role in the running of a media company in our country."

At the end of the week, analysts were saying Murdoch had to go further than merely shuttering News of the World: He had to dispose of all his British media assets, pack his bags and go!

In a Newsweek article titled 'Murdoch's Watergate?', one of the famous duo who uncovered the Watergate scandal, Carl Bernstein, was caustic and devastating: "The hacking scandal currently shaking Rupert Murdoch's empire will surprise only those who have wilfully blinded themselves to that empire's pernicious influence on journalism in the English-speaking world. Too many of us have winked in amusement at the salaciousness without considering the larger corruption of journalism promulgated by Murdoch culture on both sides of the Atlantic."

Bernstein further charges: "As anyone in the business will tell you, the standards and culture of a journalistic institution are set from the top down, by its owner, publisher and top editors. Reporters and editors do not routinely break the law, bribe policemen, wiretap and generally conduct themselves like thugs unless it is a matter of recognised and understood policy."

Speaking of Murdoch's enormous and incalculable power in Britain, the celebrated former Washington Post journalist writes that: "Almost every prime minister since the Harold Wilson era of the 1960s and '70s has paid obeisance to Murdoch and his unmatched power. When Murdoch threw his annual London summer party for United Kingdom's political, journalistic and social elite at Orangery in Kensington Gardens on June 15, Prime Minister Cameron and his wife, Sam, were there, as were Labour leader Ed Miliband and associated Cabinet ministers."

Tina Brown, writing in the Daily Beast, one of America's most influential blogs, notes that "In the past, politicians have always rolled over for Murdoch in the end ... . Tony Blair cosied up to Murdoch at every opportunity."

Former Blair media adviser Lance Prince said when he worked at Downing Street, Murdoch was like "a 24th member of the Cabinet" and no big decision could be made without him.

Phone records showed that in the weeks leading up to the Iraq war, Blair found it necessary to call Murdoch up to three times a week. "Murdoch is endlessly fascinating to watch because his talents and brilliance are equalled only by his amorality," Tina Brown concludes in her Daily Beast piece.

Murdoch was smart enough to buy up reputable publications like the Wall Street Journal, and The Times of London, which gave him the prestige and power with the elites which he needed. His influence is not just in Britain. Concedes Bernstein: "Between The New York Post, Fox News and the Journal, it's hard to think of any other individual who has had a greater impact on American political and media culture in then past half-century."

He now sits atop a US$46-billion global media empire. In a cover story on Murdoch in the November 2010 issue of Harper's magazine ('Murdoch triumphant'), Marvin Kitman quotes Viacom Chairman Sumner Redstone as saying in 1995: "He (Murdoch) basically wants to conquer the world. And he seems to be doing it." Says Kitman himself in his essay: "For Murdoch, the real value in owning media was the power to anoint prime ministers and presidents." He has always been vulgar in using his media outlets to promote his friends, would-be friends and to punish enemies.

There are a number of lessons from the Murdoch empire scandal. First, no matter how powerful you are, no matter how many powerful people you have in your pocket, you can't resist the moral outrage of the masses when there is a cascade. Murdoch had got away for decades with skullduggery, bribery, illegality, corruption. Milly Dowler has become like Mohammed Bouazizi, the Tunisian street vendor who lit himself, setting ablaze almost the entire Middle East and North Africa and ushering in the Arab Spring.

Dictator Zine El Abidine Ben Ali had ruled ruthlessly and felt safe. Until one event sparked a whole revolution and other revolutions. As the left-wing blog 'Naked Capitalism' says, "Murdoch was the Teflon Oligarch. Only now amid universal sympathy for the family of a murdered child have the hitherto craven and cowed coalesced to fight back. Only now is Murdoch being held accountable for decades of ethical bankruptcy, including not only wiretapping and bribery but three political generations of influence-peddling and who knows what? Prime ministers and MPs of both parties (in the UK), the press and even the police have cowered under his influence for more than three decades - until this week."

Rome and other imperialist empires have proven it: Oppression and class rule have a limited lifespan, no matter how invincible and inevitable oppressive regimes and systems seem. You just need the right confluence of events and circumstances. A tipping point.

But the problem is not just Murdoch. He was a macabre demonstration of it but don't be fooled. American and even Jamaican media culture have been penetrated by the same kind of amoral, self-serving and crudely pragmatic media 'ethics'. We have not dissected the implications of our obsession with money and materialism and how our contempt for moral values warps media practice. The payola concern which the Broadcasting Commission is rightly trying to combat also extends to print and comes in sophisticated and some not-so-subtle forms.

The esteemed Carl Bernstein in his Newsweek article writes about "this culture in the newsroom where you do whatever it takes to get the story, take no prisoners, destroy the competition, and the end will justify the means".

Journalists have routinely used deception and lying in 'investigative reporting' and have even won awards for it. The ends justify the means. When Sarah Ferguson was deceived into giving information on her ex, was there an outrage on the ethics of that whole 'investigative journalism'? Is it okay to use certain methods on the rich, famous and powerful but not on ordinary people? How do we navigate the slippery slope?

Is it okay to hack into US government computers to get classified information in the interest of 'transparency' and 'freedom of information'? Isn't it naïve to talk about WikiLeaks being 'stolen information' and, therefore, posing a moral problem? Who determines what is right and wrong, anyway? Does morality have an objective basis? And what's the source of ethics - God, nature? Does ethics exist objectively like quasars, atoms and particles? Is it a theoretical construct or just culturally and situationally determined? Yes, philosophy is, indeed, important, after all. Journalists tend to shy away from these issues, focusing on techniques and craftsmanship.

There is also the issue of media and power. And the power brokers of media. In an excellent essay on the scandal rocking Fleet Street, the author of The Return of the Public, Dan Hind, which deals with media and power, writes in Open Democracy': "For the first time in a generation, we have an opportunity to discuss how the media currently operate and what we need from them. The media rarely feature in our debates about power. Their power to describe is matched by their power to evade description."

Thankfully, now the press itself is under the microscope.