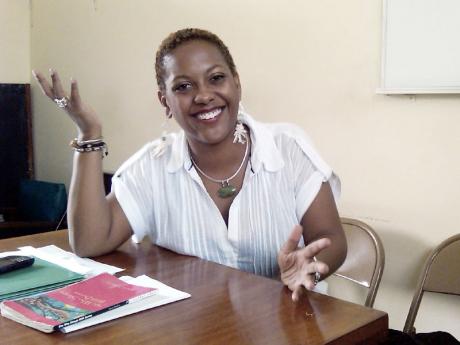 In June 2009, at the launch of Tanya Shirley's debut poetry collection, She Who Sleeps With Bones, (Peepal Tree Press) at the Philip Sherlock Centre for the Creative Arts, Dr Michael Bucknor said it marked the arrival on the literary scene of someone in the tradition of outstanding female poets from the region, including Olive Senior.

Two years later, in giving the Fourth Edward Baugh Distinguished Lecture, Professor Helen Tiffin named Shirley, along with Erna Brodber and Curdella Forbes, as Caribbean writers who she expects to have significant impact in the future.

That lecture was delivered at the Neville Hall Lecture Theatre, also at the University of the West Indies (UWI), Mona campus, where Shirley lectures in the Department of Literatures in English. But she is as comfortable at the Village Blues Bar assessing the entrants in the Universities and Colleges edition of the monthly 'Seh Sup'm' and then reading, as she is at UWI.

Shirley started writing in diaries - the kind that can be locked with a key - when she was very young. "By the time I got to age 10, I had gone through quite a few," she said. Her family is "big on reading" and Shirley's mother got her that first diary.

Shirley relished not only the opportunity to write, but "this idea I could express what I wanted and lock it up. It was the appeal of secrecy and privacy. It was that appeal that what I was writing was important enough to be written down".

Family figures significantly in Shirley's poetry. At the launch of She Who Sleeps With Bones, where the front row was reserved for family members, before she read 'Grandpa in the Departure Lounge,' he stood and opened his arms wide. She also read 'The Shifting Ground', about her relationship with her mother, and closed with a poem for her grandmother, who died from cancer.

"Tell him again, grandma, this is nothing," Shirley closed the launch to a standing ovation.

There was encouragement at the Immaculate Conception High School as well, where Shirley said "we had really good English teachers". A class exercise to write a poem resulted in more encouragement. "I have been blessed that all my life I have felt encouraged," Shirley said.

And that has led her in turn to the classroom. "I always feel when you are blessed your job is to pass on the blessing, which is probably why I teach," she said. "It is expected to encourage other writers."

The encouragement continued during 12th and 13th grade schooling in Canada ("The teachers kept saying, 'you should be a writer'") but dabbling in another possibility helped make up her mind. On returning to Jamaica, Shirley said, "I think I interned at a law firm for the summer and said, 'this has to be the most boring thing I have ever done'."

However, on entering UWI, Shirley started in social sciences and "at the end of the year, everything with writing had A and everything with figures had F". She duly transferred to English, "where I had people like Mervyn Morris and Norval Edwards looking at my work". She went on to do the Master of Fine Arts (MFA) programme at the University of Maryland, where Merle Collins was another encouraging teacher.

However, there was a glaring deficiency of Caribbean writers in the programme. "They were only aware of Derek Walcott," Shirley said. However, she said, "That encouraged me to go out and find poets."

To complete the MFA in 2000, she was required to complete a manuscript. She kept adjusting it over time and "maybe a handful survived", among them 'Guinep' and 'Roll Call'. Then, "when I realised I had only a handful, over the years I have been writing - not to put a collection together, but if I keep taking out poems, I need to replace them. Then I asked myself how to put them in order."

A Calabash workshop in which she participated, conducted by Kwame Dawes, was very helpful in that regard.

For her next collection - Shirley has almost finished the manuscript - she is looking at the connecting themes during and not after writing. "It is a different process. Now I am more aware of the central metaphor or theme running through the book," she said.

A dominant sexuality theme that people found in She Who Sleeps With Bones came out of left field. At her book launch, she read 'Tongue' ("your tongue is a humming bird/pulling pollen out of me") and 'Swirl' ("sated we stumble to bed/the seeding spilling out of us").

In his June 2009 review in The Sunday Gleaner, Paul Williams wrote "This 77-page collection is loaded with a variety of themes, ranging from death, impending doom, fear, infidelity, religious hypocrisy, melancholia, to clairvoyance."

And Shirley says now, "I am still into eroticism and sexuality. But I do not want people to walk away thinking it is a bag of slackness".

Also, she does not want to give the impression that her wanting to speak to a wide audience means she is devaluing her craft. "I want to interact with the public and be accessible, but I want to show I have studied the craft. This is something I have worked on and work on every day. Yes, I want it to seem effortless, but I want people to know there is a lot of work going on to make it seem effortless."

Still, there is effort and there is struggle. Shirley said, "Years ago, I went to a writers' colony in the US and what amazed me - I paid my way there - for everybody else, their university paid for them to attend," Shirley said. She raised the possibility of a Mervyn Morris, Edward Baugh or Lorna Goodison fellowship.

She also raised the issue of university and corporate support in the context of the immense, consistent work required. "You are constantly revising it, listening to the music behind the lines," Shirley said.