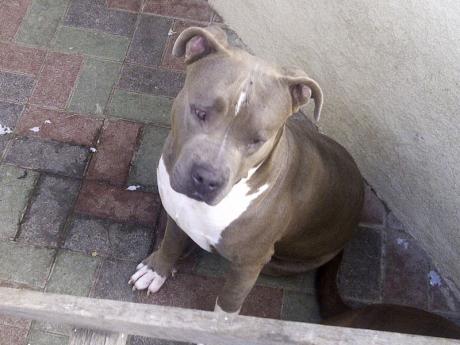 Less than a week after a pit bull mauled a senior citizen to death, the Kingston and St Andrew (KSA) Public Health Department has revealed that its inspectors have been issuing notices to Corporate Area residents, ordering them to reduce the number of dogs at their homes or face the court.

Residents of many communities are faced not just with the health risk posed by their neighbours' dogs, they are just an attack away from death as pit bulls and other dogs become popular pets, and mongrels roam the streets.

Last Monday night, 58-year-old Valerie Stephenson was attacked and killed by one of the vicious beasts in the March Pen Road area of Spanish Town, St Catherine. The pit bull pounced when Stephenson, who also lives on March Pen Road, went to visit relatives. Eyewitnesses said the dog sprung to Stephenson's throat, held her and, despite the attempts of persons to free the woman, it proved futile. Her death was swift.

In March this year, the west Kingston community of Clinton Pen, popularly known as Boat Island, was the scene of grief after a three-year-old boy was killed by a pack of about six dogs. At that time, representatives of the Jamaica Society for the Prevention of Cruelty to Animals (JSPCA), who visited the community, warned that 'without a doubt' the problem lies with the number of 'stray' dogs in the community that are left to fend for themselves. The JSPCA, as part of its attempt to help the community, also agreed to undertake a twofold mission to remove the dogs involved in the three-year-old's death from the area, and educate residents on how to care for their animals.

Baker explained that the law gives public-health inspectors power of entry into premises at "any reasonable time". This authority also extends to gaining access to vessels in Jamaica's waters and aircrafts that land on the island.

On becoming aware of the existence of a nuisance on any premises, section four of the Public Health (Nuisance) Regulations gives public-health inspectors the authority to "serve on the owner or occupier of the premises or on the person causing or permitting the nuisance, a notice in writing … to abate the nuisance within such reasonable time not being more than thirty days".

Meanwhile, Everton Baker, acting chief public-health inspector at the KSA Public Health Department, told The Sunday Gleaner that dog rearing in the twin-parish locality is a problem. However, the problem in Kingston and St Andrew is largely concentrated in middle-class communities.

"People are seemingly doing it for commercial purposes ... but we can't prove it is commercial," he said.

Baker pointed out that, although his team is called in to examine the sanitary conditions under which the dogs are kept, the inspectors have come face to face with the hostility of these cross-breed dogs towards human beings.

"I know it poses a risk when you have to go in and inspect, especially when there are so many of them, they tend to be a bit aggressive," he said.

Baker revealed that in recent times the KSA health department has received approximately 40 complaints from disgruntled residents lamenting the health nuisance posed by their neighbours' pack of 'man's best friend'.

"Some people will have all 10-15 dogs and the conditions are not conducive," said Baker, while pointing out that the visits have unearthed that many of the yards are too small for so many of the animals.

He argued further that the owners' ability to control the dogs is reduced by the sheer numbers.

In addition to the tight squeeze, some of the homes were also littered with dog droppings and swarmed by flies.

"Whatever is going to cause a nuisance, then we can ask you to reduce the number of dogs," Baker explained.

The KSA health department recently issued a notice to a female resident to reduce her complement of nine dogs to four. "It was becoming unsanitary," Baker said. Another man with 15 pedigree dogs was also asked to slash his quota.

"Neighbours have complained bitterly. Dogs are good security, but they must be kept under sanitary conditions," he urged.

Many of the nuisance cases lodged with the department involve the rottweiler and pit bull strains of dogs.

However, mongrels might still be leading the nuisance pack. Aubyn Killingbeck, acting deputy chief public-health inspector pointed out that most of the cases investigated by the department involve mongrels.

"A lot of the complaints that are coming in sometimes, are not about the pedigrees," said Killingbeck.

Baker said more oversight is needed in the importation and breeding of the pit bull and other such strains of dogs, because the current situation is creating a hazard to health and life.