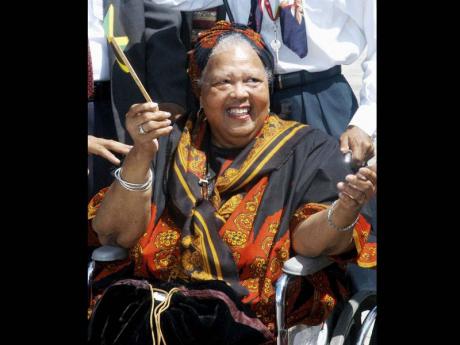 Today, of all days, Jamaica's first lady of culture, Louise Bennett-Coverley, more popularly known as Miss Lou, would be turning over in her grave if only she knew what cyber vandals have done to her official website.

It is the fifth anniversary since Miss Lou died aged 86 in Toronto, Canada, on July 26, 2006, yet Internet pests have somehow hacked into her hosting account and desecrated her website at louisebennett.com.

The hackers, unveiled as HTeam.us, have defaced the homepage with their logo and left a message brazenly declaring, 'Welcome to HTEAM.US - we will not go down'.

"It is very disappointing to see a cultural icon of Miss Lou's national hero stature being disrespected by this regrettable act," said Michael Conally, publisher of Yush. "I hope the webmasters and relevant authorities restore the site to its former glory and prevent such lapse in security from happening again."

Miss Lou, born Louise Bennett on September 7, 1919, was Jamaica's leading poet and activist. She is still a well-loved household name in Jamaica and one of the most respected cultural icons.

She wrote her first dialect poem at 14 years old. A British Council Scholarship took her to the Royal Academy of Dramatic Art where she studied in the late 1940s.

Her contribution to Jamaican cultural life earned her the MBE, the Norman Manley Award for Excellence (in the field of Arts) and the Order of Jamaica in 1974. The Institute of Jamaica awarded her its Musgrave Silver and Gold medals for distinguished eminence in the field of arts and Culture. In 1983, the University of the West Indies awarded her the Honorary Degree of Doctor of Letters.

It is not yet clear what action the webmasters, hosting company or the Jamaican authorities will take to restore Miss Lou's website.