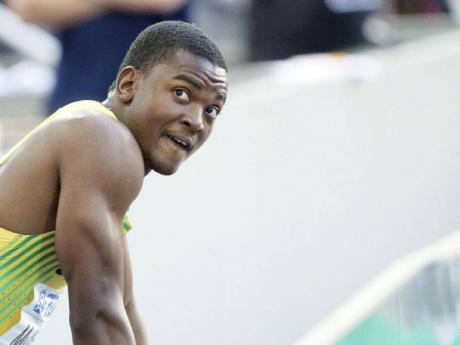 The future of Jamaican sprinter Steve Mullings now hangs in the balance after revelations that he tested positive for a masking agent, two weeks before the start of the IAAF World Championships in Athletics in Daegu, South Korea. Mullings now faces a minimum ban of four years and could be removed from the sport for life.

It is understood that the results of a test carried out by the Jamaica Anti-Doping Commission during the Jamaica Athletics Administrative Association (JAAA)/Supreme Ventures National Senior Championships, held between June 23 and 26 this year, showed the presence of the substance, which is meant to conceal the existence of banned substances or illegal drugs, such as anabolic steroids or stimulants.

Several efforts to contact the sprinter and his agent John Regis proved futile.

The news comes just over a week before the team departs for a one-week camp in Gyeonasan, South Korea. The team is also set to be named next week.

Mullings previously failed a drug test during qualification for the 2004 Olympic Games in Athens, Greece, after higher-than-normal levels of testosterone were found in his system.

As a result, he was slapped with a two-year ban and his results between the middle of 2004 and 2005 were wiped from the records.

Failing a reversal, this latest incident could effectively mean the end of his international career.

The athlete has reportedly been notified and will now have to face a disciplinary hearing, effectively ruling him out of the championships in Daegu, where he was seen as a strong medal contender in the 100m and 200m. Mullings was also expected to feature on Jamaica's 4x100m relay team.

President of the JAAA, Howard Aris, was unable to comment and said at press time that he had received no official notification.

In all doping cases, the athlete has the right to a hearing of their case before the relevant disciplinary body or tribunal. The athlete must confirm in writing, within 14 days of notification, that they would like a hearing, otherwise it is assumed that the athlete accepts that a violation has occurred.

The hearing before a tribunal must be held within two months from the date of notification to the athlete. The athlete has the right to legal counsel and to call witnesses. The decision of the tribunal will be sent to the world's governing body, the IAAF.

If the IAAF does not agree with the sanction, the case will be reviewed by the IAAF Doping Review Board, which decides whether it appeals to the Court of Arbitration of Sport (CAS); if so, it may reimpose suspension. The athlete also has a right of appeal to CAS.

The news comes as another blow to Jamaican track and field after recent scandals, particularly shortly before the last IAAF World Championships held in Berlin, Germany, in 2009.

Back then, five athletes tested positive for a stimulant at the national championships. The athletes were served with three-month suspensions and allowed to resume their careers.

Last year, World and Olympic 100-metre champion Shelly Ann Fraser-Pryce tested positive for the painkiller Oxycodone and was subsequently banned for six months. Her ban ended in January this year.