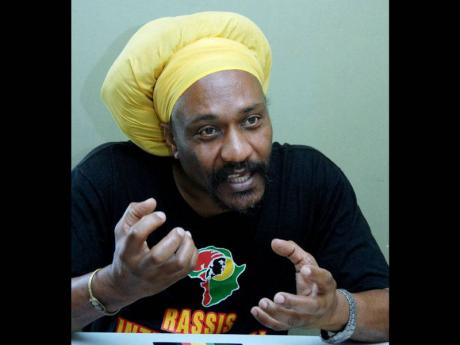 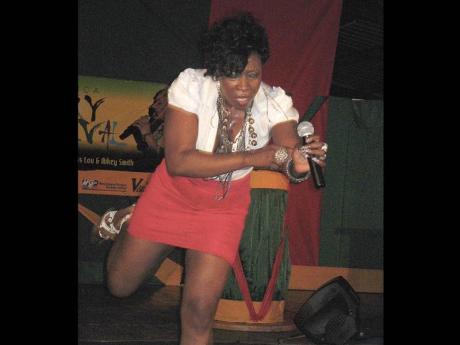 Macka Diamond, special guest at the inaugural Jamaica Poetry Festival, does the Cow Foot dance during her set on Sunday night. - Photo by Marcia Rowe 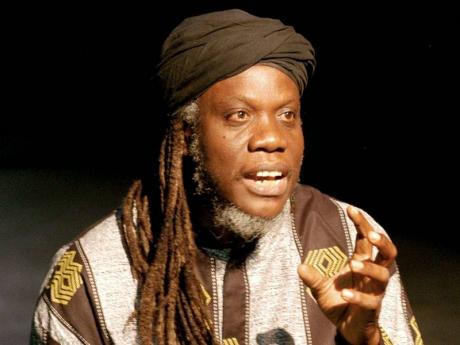 The Sunday evening rains could not temper the strength of the spoken word.

It was a showpiece of words formed in poetry. And the creative pens seemed to find all topics loveable. The "linguistic practitioners" who performed with passion and, in some cases, high energy, brought with them a wide range of experiences, from national finalists in the Jamaica Cultural Development Commission's Festival of the Performing Arts - speech and drama to the internationally acclaimed.

As expected, the more experienced and exposed poets were entertainingly funny, brutally blunt and forcefully engaging.

The occasion was the inaugural staging of the Jamaica Poetry Festival: In Tribute to Marcus Garvey, Miss Lou and Mikey Smith. Only few remembered to pay tribute.

After opening remarks from the MC, Prince Tebah and the Sons of Thunder, with their piece titled 'Drumming Groundation', will go down in history as the opening act at the first Poetry Festival. But many will remember that the party really began when the multi-talented Racquel Jones stood before the microphone and took a scathing look at crime, police brutality, health and incest through the eyes of young Jamaicans in 'Mi Come from a Time'.

She followed it with 'A Ghetto Sound Track' and ended her stint with 'Hate Me Then, Hate Me'.

Fuzion, in relating his love for the streets, described them as "chaotically beautiful" and then delivered 'I've Got to Go'. In 'Mirror, Mirror on the Wall' Fuzion stripped bleaching and then closed with a witty poem titled 'Woman'. The M.A.D. Poet - Melissa Dean - kept the party going with passion.

She mesmerised the audience with issues from the perspective of the Jamaican diaspora, such as racism and the incarceration of Jamaicans.

With the end of intermission, it was the headliners' moment to justify their status, and they did - mostly with the familiar.

Joan Andrea Hutchinson was first. She got the audience laughing with some favourites like the satire on obeah titled 'Hog Name Crowd'. She also included 'Tenky Miss Lou, Tenky' in tribute to Miss Lou, as well as 'Kin Teeth Kibber Heart Bun'.

Michael Abraham took time off from comedy to present sobering commentary on the idiosyncrasies of the various denominations in 'Hard Talk', then took the audience to church with 'Let Us Pray', before providing a sit-up and pay attention in the brief 'The News'.

When Yasus Afari, who conceptualised the event, arrived on the stage, in addition to performing titles such as 'My Mother Who Fathered Me', 'I Pen and Freedom', he used the opportunity to speak about the festival. He explained that "We have to come together for poetry in Jamaica."

Macka Diamond was the special guest. She was energetic in speech, song and movement. But while there was no doubt that the dancehall diva and now author's electrifying performance was appreciated, it was not enough to get those who are ardent listeners of words to get up and dance the Cow Foot. She made her exit while still on a high, and Mutabaruka closed the show close to the stroke of midnight.

The social commentator made reference to the unrest in the United Kingdom and a poem he wrote years ago. He, too, paid tribute to Miss Lou and gave a very interesting twist on nursery rhymes. On request, he closed his very engaging performance with the classic piece, 'Dis Poem'.

Fittingly, the festival was held at the Louise Bennett Garden Theatre, Hope Road, on the birthday of Marcus Garvey, the day Mikey Smith died and near enough to Louise Bennett's birthday in September. At the end of the festival, a pleased Yasus Afari told The Gleaner the festival would become a calendar event. While he was unable to fully asses the show prior to a meeting with his team, he noted that some changes would take place at next year's event, one of which may be the introduction of a one-hour segment called 'Open Mic'.