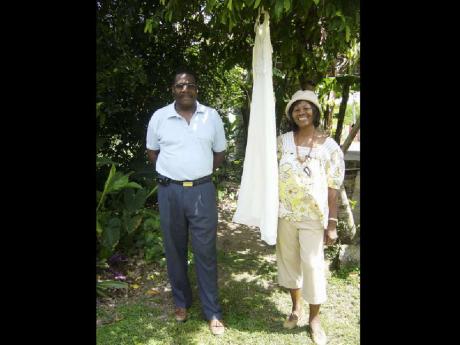 Ray and Yvonne Kirlew, of Dairy, Discovery Bay, St Ann, stand under a soursop tree beside the dress that Yvonne was supposed to be buried in after she was diagnosed with lymphatic cancer in 2002. - Photo by Paul H. Williams

CANCER IS a scourge for which there seems to be no wholesale antidote. It attacks and kills just about anyone. No respecter of race, politics, religion and social status it is. It has decimated familial ties and relationships, and even attempted to destroy the love affair between Ray and Yvonne Kirlew of Discovery Bay, St Ann.

Diagnosed with lymphatic cancer (Hodgkin's lymphoma) in late 2002, Yvonne went through an agonising period of chemotherapy which twisted and wracked her being with pain and nausea, in its efforts to kill the cancer cells. It was killing her instead, and so she planned her own funeral. But Ray was determined that the woman he loves was not going to leave him, and he nursed her back to good health. By December 2004, it seemed that Yvonne was cancer-free.

The Gleaner told their story in a two-part instalment in July 2007, and we also updated readers in January last year with the news that the cancer had returned between December 2008 and March 2009. Yvonne got ill again, and the dreaded chemotheraphy was suggested. Around the same time, Ray got an email about the cancer-curing properties of the soursop tree. He did some further research, and was mesmerised by what he read. Not having any empirical evidence, he set out to make the leaves and bark of the soursop tree into a concoction that would kill Yvonne's cancer cells.

After much encouragement from Ray, Yvonne drank the potion. She got sicker initially, and refused to drink any more, but Ray urged her on. After a month of being on the dose, Yvonne's health improve tremendously. Tests in September 2009 to determine when chemo-therapy would commence showed that the movement of the cancer cells had stopped. Amazingly! More tests were done, and up to Monday, January 18, 2010, when The Gleaner reported that 'Raymond Kirlew 'cures' wife cancer with soursop leaves', Yvonne, who gets tested regularly, but had no cancer.

There were many sceptics, some of whom said it was a matter of time before the cancer cells return. Some readers even questioned Ray's wisdom, or lack thereof, for administering the soursop concoctions to his wife, despite the fact that he is not a medical doctor. But now, Ray is saying since the story broke, many people, including medical doctors themselves, have contacted him seeking advice on how to prepare the potion.

"Everyone who has called me regarding this soursop treatment, I have never ever asked for a penny, nor have I got a penny, and was not expecting any. I know for a fact that this thing has saved my wife, and whosoever wants to know how to make it, I would be happy to give them that information," Ray said.

He has even told the story of a woman, known personally to him, who had lung cancer and was sent home to die because the cancer had spread to other organs. She is now living her life cancer-free after drinking the soursop potion. Another gentleman who was suspected of having a tumour in his brain is now doing well too. Some of those who refused to drink the concoction, Ray said, are now dead.

Ray and Yvonne have no regrets. They are convinced that Yvonne is alive because of the soursop tree, which bears that 'jucky-jucky' fruit that gives us that after-Sunday dinner belch. But what does Yvonne have to say to people who are still of the view that she is using a concoction not prescribed by doctors or approved by the authorities?

"I would say to them that the same way chemotherapy is used in treating cancer patients, it was more than likely discovered by people who were trying to find a cure. By testing these treatments over a long period of time, people were healed, even temporarily ... . I am one of the lucky ones, I think, because I tried something that may not have been proven, may not be in the medical books, but I tried it and it works for me."

And it seems to have work wonders for Yvonne in other ways. "I also had a problem with my blood pressure. I have a tendency to have high blood pressure, and whenever I take the soursop drink, my pressure is down ... . I am convinced that the soursop helps to kill the cancer cells, lower my blood pressure, and to repair the damaged nerves," she said. The chemotherapy that she went through in 2003 had damaged some of her nerves, and thus she was having problems with her coordination.

It is almost 10 years since Yvonne, whose mother, father and brother had died of cancer, was diagnosed, and almost two years since she had started drinking the soursop concoction. Very recently, she went to New York to do some more tests. A week before she left, she was feeling pain in some major lymph nodes. So, she was a bit nervous upon leaving the island. Well, she is back, with a clean bill of health, and the pain is gone.

She still has the dress she had planned to spend eternity in. It's in her closet, still clean, still stylish, but she has no plan to wear it anytime soon. And even so, it might just be too small, she said.