Will there be a new recession? 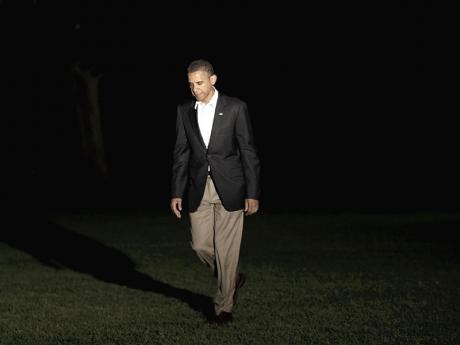 US President Barack Obama - is he prepared to tell Americans that the prosperity dream, as they have known it, is now ending?- AP

The American economy is in deep trouble again; so is the world economy. Over the last century, whenever there has been a global financial crisis, events show that it started in the United States.

In 1929, the stock market was almost totally wiped out by a free-fall loss of 89 per cent of its assets. It started when the US Congress proceeded to impose wide-scale punitive duties on 20,000 items of import. Sensing that there would be retaliation by the imposition of similar duties on exports to other countries from America, Wall Street stockholders embarked on a panic sell-off which eventually created the Great Depression.

The impact created massive unemployment which reached as high as an unbelievable 26 per cent. This condition lasted for the entire decade of the 1930s until President Franklin Roosevelt strategised the US entry into World War II. The intervention cranked up the idle production capacity of the American economy, wiping out unemployment created by the Great Depression and restoring economic growth.

From the late 1970s to the early 1980s, another financial crisis emerged. This was caused by the reaction of Washington to the drying up of capital as a result of a massive transfer of finance to oil-producing countries to meet a dramatic increase in the price of oil (more than 300 per cent). To revive the consumer-driven American economy, it was necessary to increase money supply, capital and credit.

The Reagan government turned to its baseline philosophy of capitalising the market. It did so by removing the lending ceiling imposed on small savings and loan banks. As a result, small-time bankers became big-time lenders overnight. They proceeded to lend recklessly, creating great pressure on the financial system. This produced an untenable accumulation of loan defaults which spread throughout the entire US economy. The worst recession since the Great Depression of 1929 eventually ravaged the global economy.

The third recession, commencing in 2008, and still having serious impact on critical sections of the world economy, had a different genesis. The American economy has historically enjoyed the highest reputation for secure and rewarding investment. It was only natural that the exceptional prosperity of countries such as Brazil, Russia, India and China (BRIC) would result in greater investment in US bonds and Treasury bills. But the excessive investment of the BRIC countries and other sovereign funds was more than could be absorbed by the bond and Treasury bill market.

Rather than turn away good money, Wall Street developed financial derivatives, including fraudulent schemes, to sop up the excess. This led to the creation of subprime mortgages (mortgages with little or no collateral). Trillions of dollars of this virtually worthless paper was wrapped with regular mortgages and sold as investment packages to investment houses, insurance companies and banks throughout the world. When this was discovered, financial houses realised that the worthless investments were pushing them to the brink of financial collapse. Many did. Governments had to step in as millions of workers lost their jobs globally and banks and insurance companies, many of them gilt-edged institutions, collapsed; others were crippled.

Today, the question being asked is: Will there be another recession? The excessive indebtedness of the US economy is, on one side of the Atlantic, a gaping hole into which the economy could plunge again. On the other side of the Atlantic - the European Union (EU) - several countries face the same unserviceable debt crisis (Ireland and Greece, and to a lesser extent, Spain, Italy and Portugal). Further deterioration of this indebtedness, without rescue, could be disastrous to the financial system of the EU.

The excessive burden of extraordinary debt in America and the EU demands urgent attention. The reaction of Europe, where the more solvent members of the EU, notably Germany, are rallying to try to save the regional financial system, is far different from the American situation, where Washington is struggling within itself to control the ceiling of the national debt and a future economic debacle for the US economy by a destructive congressional political power play.

While the congressional struggle has been presented as a noble effort to control expenditure and reduce debt, it was also unmistakably an intense, politically partisan struggle to:

pin failure for the overblown debt on political opponents, particularly bearing in mind the presidential elections of next year;

reinforce the historic images of the Democratic party as being spendthrift and the Republicans as uncaring;

slant the argument to a racial platform to demean President Barack Obama, whose academic cloak and liberal appeal were offensive to the ultra-conservative Republican right and their contrived image of black America as lacking in ability.

The caustic displays on both sides of the political fence were hurtful and damaging to the American economy, creating a first-ever financial-rating downgrade of the impeccable triple-A rating befitting the role of the US as banker to the world.

Ironically, both political positions are economically correct. The Republicans are correct in calling a halt to the growth of the US national debt, which is among the highest in the world. This means substantial cuts in budget expenditure. Democrats are right for wanting to help the poor to overcome their most vulnerable condition, lack of effective available health care. This requires a considerable increase in budget expenditure. A civilised discourse would have found a way to deal with the plight of the poorest of the poor without jeopardising the creditworthiness of the country. But this was not to be. Extremists made sure that national political point-scoring wasmore valuable than the national economy and national welfare.

If the real fundamentals of the issue were limited to the petulant display on one side of the Atlantic and political doggedness on the other, in due course, the mud could be more easily wiped away. But the issue has not been fully thought out. Only some jagged edges have been revealed. The true depth of the problem, when deeply plumbed, shows a chasm of difference between the approach of the historically strong industrial world and the traditionally weaker developing nations.

Ironically, it is the most prominent of the developing nations, led by China, which have, in recent decades, been transforming the global economy, while the industrial countries have been mired in debt crises. They became world leaders in economic growth and stability, proceeding at such a rapid pace that China is expected to overtake America as the world's foremost producer of goods - an unbelievable feat. This shift in productivity was not artificially contrived. It is the consequence of cultural foundations created by historical values and a deep work ethic, which have enabled the development of economic strength.

Throughout history, Far Eastern people have defined their cultures on the principles of hard work and thrift. Western nations also recognise these principles, but to a far lesser extent by comparison with the supreme efforts made by Eastern people. The savings rates of the US and the UK, for instance, are among the lowest in the world.

These differences between the lifestyles of the East and West are at the root of the different scales of achievement in production and competitiveness. The imbalances created have distorted the market which existed previously for centuries, creating sustained riches and poverty. If the West is seeking to rebalance its economies to the Eastern thrust, there is only one way to match the results of the East: depreciate the value of the currency. This is already happening, as the US dollar depreciates based on adjustments; fewer workers and less pay; more work and more savings; lower interest and lower costs; and less expenditure and less debt.

This is already happening as the race is on to close the cultural divide. But no leader will subscribe to the adjustments being made as national party policy for understandable political reasons. Hence, the hidden hand of the market is affecting the adjustments.

No one will pronounce the fading of the American dream, even though it is happening and will continue to happen. This is the deeper dimension, unknown and not acknowledged by those who see the problems as debt, credit expenditure and revenue. These are the symptoms of far more powerful cultural forces which direct work, savings and productivity as the solution to all the perceived problems.

The gauntlet has now been thrown down. Will President Obama and other Western leaders pick it up? Will they tell their people that the only sustainable way out of this crisis is for them to work harder, cut wages, produce goods more cheaply to compete better, and improve earnings at home and abroad, from which they must save more in order to borrow less and thus strengthen their currency, failing which the value of the reserve currency, the US dollar, will continue to slide until - like it or not - the US will no longer be the largest, strongest, most powerful economy in the world, but a second-rate economic power?

Would they be prepared to say that the prosperity dream, as they have known it, is now ending? A lower level of living is inevitable? I doubt it. A cultural shift of oceanic dimensions would be needed to do this. But it is the willingness to grasp the deep dimension of these consequences which will determine whether new recessions will follow and the cries continue for jobs, jobs, jobs.

Edward Seaga is a former prime minister. He is now chancellor of the University of Technology and distinguished fellow at the UWI. Email feedback to columns@gleanerjm.com and odf@uwimona.edu.jm.