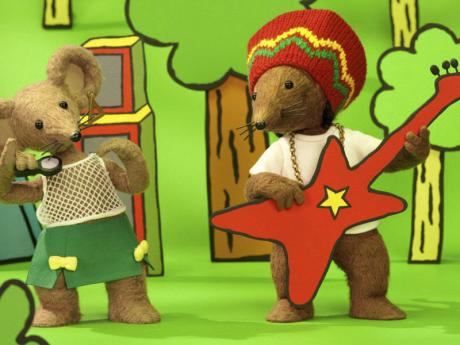 Rastamouse plays the guitar with one of his band members.- Contributed 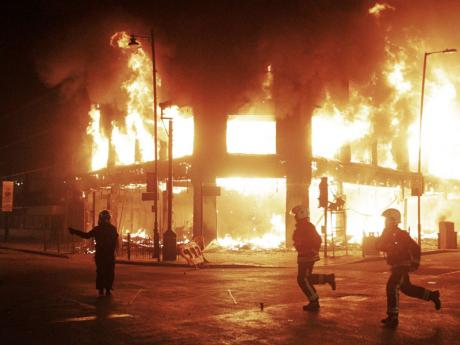 In this August 7 photo, firefighters and riot police survey the area as fire rages through a building in Tottenham, north London, as rioters wreaked havoc. - AP
1
2

Wat a devilment a Englan!

But me wonderin how dem gwine stan

The answer to Miss Lou's question, asked in her poem written in the 1950s, was given in the last week or two. In good Olde England, the home of the English language, the Jamaican language of which she was so proud and in which she wrote, is taking over.

It is threatening to burn to black ashes the linguistic purity of the mother country. And the fire with which it blazes is part of the "... flames lambent, wrapped around Tottenham, wrapped around Clapham ..." which is how the British historian, David Starkey, described the past week's rioting across London and other English cities.

This he does in a controversial BBC Newsnight TV programme on August 12. He goes on to say, "The whites have become black. A particular brand of destructive, nihilistic gangster culture has become the fashion. And black and white, boy and girl, operate in this language together. This language which is wholly false, which is this Jamaican Patois that has been intruded in England. Which is why so many of us have this sense of literally a foreign country."

This is, indeed, the end of civilisation as we know it, or at least as David Starkey knows it.

The riots have been satirically described in at least one publication as the Rastamouse Riots. The reference here is to a BBC children's cartoon series featuring Rastamouse, an animated dreadlocked, reggae-singing mouse. Rastamouse fights crime and spreads the gospel of peace and love. He, his crew and other characters speak mainly using the Jamaican language, albeit heavily anglicised. This anglicisation, one suspects, is in order to ensure understanding across the wider, non-Caribbean population in the United Kingdom.

The series has been a huge hit for the BBC among children across all communities in England. The BBC has, however, been bombarded with complaints about the series on two counts. The first is that of racial stereotyping. The second, interestingly enough, is given to the heavy anglicisation of the Jamaican Patois spoken by the characters, the use of 'slang' (read 'Jamaican language').

According to one source, up to March this year, the BBC had received more than 100 complaints about the series: six about racism and 95 about language. The language of this Jamaican mouse gnaws out the heart of linguistic rectitude in the land of Milton, Shakespeare, Chaucer and the King James Version of the Bible.

Maybe, however, one can turn to the traditional dialect of working-class London, the language of Eliza Doolittle of My Fair Lady fame, for a last-ditch defence of language that is authentically English. Her language variety, Cockney, however, is on its last legs, brought to its knees by the language of the Jamaican invasion. It has been replaced by a form of speech referred to by Sue Fox and her research team at Queen Mary College, London, as London Multicultural English, which has more popularly been styled 'Jafaican'. Even though the 'Jafaican' label suggests that it is fake Jamaican, it is the natural, normal language of a large portion of working-class young people, of all races and backgrounds, growing up in Inner London.

These boroughs of London have been subject to waves of migration since the Second World War, starting with the Caribbean migration beginning in the late 1940s. Fresh waves of migration, notably from South Asia, have turned Inner London into what some commentators have described as one of the most ethnically diverse places on earth. This multi-ethnic and multicultural profile was, for a brief moment a few years ago, turned by the powers that be into a virtue, and used as the central plank of the campaign that won London the prize of hosting of the 2012 Olympic Games.

Descendants of Caribbean (including Jamaican) migrants have long been outnumbered by other ethnic groups in Inner London. To explain the disproportionate Jamaican influence, one could try the academic explanation, the effect of the 'founder's principle'. Whoever was there first had more influence than those who came later.

Naturally, nationalist Jamaicans, of the 'we run tings' type, would beg to differ. For them, the explanation should be obvious: the strength, the power and the style of Jamaica and its people. This is a country that is a world power and its language a world language. Their vision is reflected in the instruction by Louise Bennett-Coverley, in her 1962 poem 'Independence', to compilers of world atlases, that they should '... caution worl'-map, fe stap draw Jamaica small'.

But the enemies of the Jamaican language are as numerous in England as here in Jamaica. In England, the language has come to be viewed as the source of riot, of fire and the flames. The English-speaking whites of Olde England are in the process of becoming linguistically and culturally black, if we are to believe David Starkey. This is happening through the infiltration of Jamaican language and culture via a Patwa-speaking Rasta mouse, a children's cartoon character who undermines the citadel of the English language at its centre. This he does by contaminating the speech of children and young people in Olde England.

Rastamouse is an honest, crime-fighting, peace-and-love rodent. However, a desire to imitate the Jamaican language he speaks, however heavily overlaid with English, is, if we are to believe David Starkey and his ilk, sufficient to inspire thousands of otherwise good, peace-loving, law-abiding white, English young people to rise up, loot and torch huge portions of the great English industrial cities of London, Birmingham, Manchester and Nottingham.

This, then, is the power of the Jamaican language! The Empire has struck back, or in the famous words of Miss Lou, uttered early at the start of the Jamaican migration to England in the '50s and '60s, 'Jamaica colonising England in reverse'/Jamieka kalanizin Ingglan in rivors/. The heat generated by the Jamaican language has turned white people black and burnt the shining buildings of English cities to black ash. There are those on the Rock who argue that the Jamaican language should not be given any official recognition here, nor used in the education system. Their reason is that Jamaican is not an international language and not used outside Jamaica. Well, perhaps, they should ask Rastamouse. Or, better yet, David Starkey.

'Bak a yaad', the association of the Jamaican language, is not with fire but with another source of heat, moral depravity, read 'slackness'. For us in Jamaica, therefore, we have an image of riotous behaviour which more aptly captures the linguistic situation in good Olde England. It is of Rastamouse wining (gyrating, for those not familiar with the vernacular) down on Eliza Doolittle against the backdrop of London Bridge as it is burning down.

Hubert Devonish is a professor of linguistics at the UWI, Mona. Email feedback to columns@gleanerjm.com and hubert.devonish@ uwimona.edu.jm.