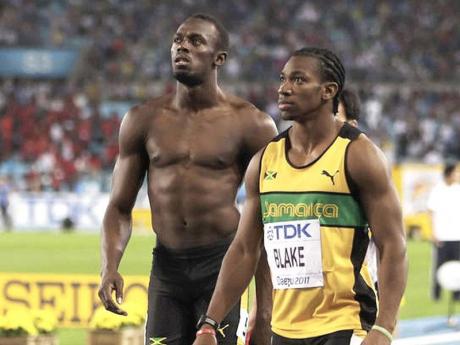 Usain Bolt (left) and Yohan Blake on the track shortly after the world record holder was disqualified from the 100m final at the IAAF World Championships on Sunday. - Getty Images courtesy of IAAF

"Listen, just keep your focus. A me and you a go fight it out towards the end."

Those were Usain Bolt's last words to freshly crowned 100m world champion, Yohan Blake, before both athletes stepped into their starting blocks ahead of Sunday's men's 100m final at the IAAF World Championships in Athletics inside the Daegu Stadium in South Korea.

In the end, Blake was the only one speeding across the finish line after the Olympic and defending World champion Bolt was ejected for a false start.

It was the realisation of a lifelong dream for the former St Jago High School athlete, who watched in 2008 as Bolt climbed to the top of the podium in Beijing to collect his medal. He knew then that he, too, wanted to experience that sort of success.

Blake won in 9.92s despite a strong headwind, with American Walter Dix, 10.08, and Kim Collins, 10.09, picking up the silver and bronze medals, respectively.

From high-school star to world-beater, we had seen that storyline before. This time, however, it was Blake who was playing the lead role.

"Big Man" were the first words that Bolt directed at Blake after his victory and, as Blake shared, it has been nothing but love and support since from his 'big brother' - a man he considers a huge motivation and source of inspiration.

"We are on the same block (in the Athletes' Village) and we always hang out. He told me thanks a million times since the win and was very happy for me. Funny thing is that he always used to call me 'Junior' and he changed that to 'Big Man' now," Blake said with a laugh.

It's that brotherly environment at the Racers Track Club that has fostered Blake's development.

"It's a family right there at Racers Track Club. It's a wonderful atmosphere to be in," said Blake. "Usain, in particular, helps me a lot. In training, he always motivates me and keeps me focused. He is a wonderful support to have, a wonderful guy to be around."

Bolt, however, wasn't around on Tuesday as the younger Jamaican took part in a promotional event outside the stadium with sponsor adidas as spectators lined up for autographs and pictures of the youngest-ever 100m World champion.

Blake's commercial stock is about to hit new heights and, though still a considerably shy individual, he is beginning to come to grips with the demands and attention that go along with being a World champion.

"Trust me, I am living a dream," said Blake during an interview with The Gleaner on Tuesday, gold medal proudly dangling from his neck. "I have been praying for this since I got to Daegu. I couldn't sleep. The 100m has been playing on my mind and I have to thank God, thank coach (Glen) Mills, thank Shaun Kettle (Racers Track Club's therapist), Timothy Spencer and Cubie Seegobin, who has stuck by me from the start."

Blake, who himself has heard the conspiracy theory that it was a twitch from him that led Bolt to false-start, rubbished that idea.

"Twitch? It's a normal reaction for me. Bolt was just excited and ready to run," he responded, already developing the media savvy that he will need going forward.

Mills, Blake's coach and the man who also conditions Bolt, says he was pleased with the maturity showed by Blake in the final.

"He performed well. I was very pleased with how he was able to hold his composure because, certainly, that kind of situation affected him because they both train together, work together," said Mills.

Seegobin, who has been with Blake from the start of his career, was also very happy for his client.

"For me, it's very emotional and I am very happy for him because in time I thought that he would always become what he has, and we expect that he will become much more," said Seegobin.