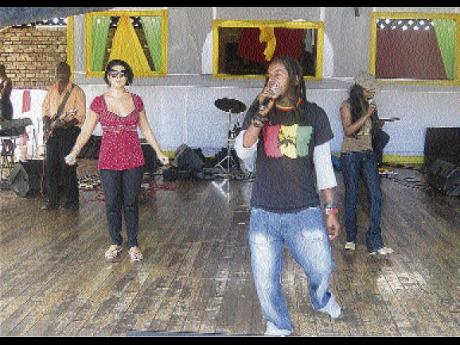 Young gun Abijah, as well as the exciting Tessanne Chin and rising star I Eye are leading a group of Jamaican musicians and dancers on a major 25-city concert tour of Japan.

The tour is being coordinated by the prestigious Min-On Concert Association in collaboration with the Embassy of Jamaica, Tokyo, and Jamaica's Ministry of Youth, Sports and Culture. The group of artistes, dubbed 'Jamaica Rocks', will be in Japan for roughly two months, with the first of their gigs set to take place in Tokyo on Friday.

This will be the second in a series of summer concert programmes put on by Min-On, dubbed Caribbean Musical Cruise, featuring countries of the Caribbean region. The programme began in 2009 with artistes representing Trinidad and Tobago.

The Jamaican group will be trekking all over Japan, doing shows in several prefectures, including Yokohama, Chiba, Kanagawa, Osaka, Shimane, Tochigi, Nagano, Aichi, Hiroshima, and Hokkaido.

Their 24th and last performance will be on Sunday, October 16, in Toyama Prefecture. They will also do a couple of concerts specifically for schools, as well as a couple of special-exchange activities.

Singjay Abijah, whose signature anthem Revelation spent upwards of 30 weeks at the top of the charts and which kick-started a career that has been, perhaps, more of a slow burn rather than one that has exploded, has nonetheless had a solid career. He has performed all over the world and has successfully collaborated with the likes of United States R&B artiste Tevin Campbell, DJ Krush, and top Jamaican acts like Beenie Man, Yellowman and others. The articulate Abijah has also delivered motivational talks to students at schools and colleges across Jamaica and elsewhere, including at Oxford and Harvard universities.

Tessanne Chin has been making a name for herself with her brand of rock-tinged reggae and has opened for Peabo Bryson, Roberta Flack, Boyz II Men, and Patti LaBelle, among others, and has done backup vocals for reggae legend Jimmy Cliff. Newcomer I Eye emerged through the Jamaica Cultural Development Commission's Festival Song Competition and has since come under the wing of respected veteran producer Clinton 'Specialist' Dillon, who is also the tour manager for the group. I Eye is now getting set to release her first album titled Fever Grass.

The vocalists will be backed by the Skool Band, which will be led, in the absence of band leader Desi Jones, by accomplished guitarist Seretse Small. The band line-up is completed by Chris Tyrell (drums), Dale Haslam (bass), Courtney Sinclair (keyboard), Aaron Verene (percussion), and Everton Pessoa (trumpet/percussion).

While Japanese audiences, generally, have long been familiar with reggae music and Jamaican singers and deejays, other aspects of Jamaican culture are substantially less known, among them, dance. The performances by the four representatives of the National Dance Theatre Company (NDTC) will go some way to redress this imbalance.

The dancers will be led by the NDTC's dance captain, choreographer and dance lecturer Marlon Simms, and he will be accompanied by Chelcia Creary, Sheckena Daley, and Javana Rowe.

The event will also be attended by a large contingent from the diplomatic community in Tokyo, led by Jamaica's Ambassador to Japan Claudia Barnes, who is understandably upbeat about the cultural exchange.

"I hope that this tour will inspire the (Japanese) people to experience and learn more about Jamaican culture, especially those people who have not yet been exposed to our country. I also anticipate that this will encourage the people of Japan to visit our beautiful country in the future. In this sense, I believe that this cultural exchange will further strengthen the cultural bridge between our two countries," Barnes said.

The Min-On Concert Association has a distinguished history of promoting high-profile cultural exchanges between Japan and other nations and introducing the culture of countries from around the world to Japanese audiences.

In fact, according to Eugene Hirahara, Min-On International Affairs counsellor, Jamaica will be the 104th country so featured. The range of artistic and cultural styles presented has included everything from European and Chinese opera, to ballet, to the indigenous folk music of many nations, to tango.

"Every year, on average, we organise over 1,000 concerts across Japan, with an average audience of 1.2 million. Over the years, more than 120 million people have come to Min-On concerts," Hirahara said.

The summer 2011 issue of the organisation's quarterly magazine, Harmony, is largely devoted to Jamaica.

With all tickets for the Tokyo show already spoken for, sales for the other concerts are also said to be going very well.