Young int'ls to get greater opportunity in MLS 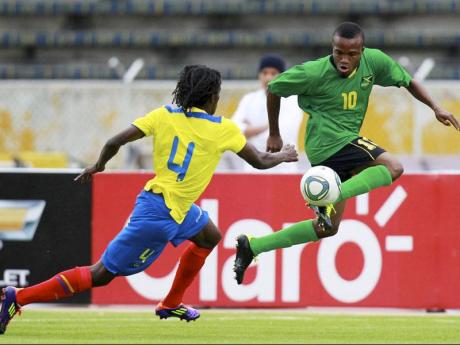 North America's top professional football league is set to open its doors wider for young international talent next year, but it remains unclear if Jamaicans will be among the primary targets for welcome.

Major League Soccer (MLS) recently announced it will adjust its rule for designated players (DP). That should result in a greater influx of untested youth from countries outside the United States and Canada, where the league is played.

The rule, which becomes effective for the 2012 season, reduces the financial downside invited foreign players will have on MLS clubs who decide to sign them.

Currently, MLS clubs are each allowed three DPs. The salary paid to each, usually a high-profile but veteran player such as David Beckham or Thierry Henry, is well above that of others on the team's roster. A DP also accounts for US$335,000 against the total amount each team is allowed to spend for players' salaries - otherwise called the salary cap.

Therefore, DPs like Beckham and Henry are able to earn millions of dollars per year in salary, but not all of that is counted against their team's salary cap. But the clubs still feel the hit for signing them as it limits the amount they can spend on other players.

According to the new rule, clubs, which before were not eager to sign untested youngsters as DPs and absorb the huge salary cap impact, will now be able to afford to take a chance on them in the hope of developing their talent. The MLS will also increase the capability of each team to scout overseas players.

According to executive vice-president Todd Durbin, MLS has decided to accommodate younger potential.

"We had two decisions to make," said Durbin during a recent conference call. "Do we continue to operate how we have historically, or do we make changes to these rules and tear down the last barrier to entry?"

The new rule will allow designated players ages 20 and under to attract only $150,000 against an MLS team's salary cap. Those ages 21 to 23 will cost teams $200,000 against the cap. At first glance, that could mean young local players stand to benefit.

"I think it will continue to open the possibilities for Jamaicans," Harbour View general manager Clyde Jureidini said recently.

However, the expectation is that players from South America, Central America and Mexico are likely to benefit most and immediately, despite Jamaicans' growing reputation in MLS for producing talent.

Generally, Jamaican players do not develop as quickly as others elsewhere and Jureidini is cautious about Jamaicans' prospects for cashing in immediately.

"Who they (MLS clubs) will select, I'm not sure," he explained. "I don't think the US really regards our younger players as prime targets. They've really gone for (Jamaican) players in their early-to-middle 20s, rather than younger players.

"In the region, USA and Mexico, in particular, are really the players who have been outstanding at the younger age group. So they probably will look at the Hispanic market and the European market."

Jureidini believes the MLS already has access to Jamaica's young talent through the league's draft, which allows clubs to select players from US colleges where many Jamaicans attend on football scholarships after leaving local high schools. That way they do not have to pay much for the players' development.

"What they have targeted the younger Jamaican players to do is get them into the collegiate system or the university system and then seep them into the (MLS) draft or into their franchises without paying for them, or paying for them at extremely low values," said Jureidini.

But despite unquestioned value to their clubs and the league - Cunningham became the MLS's all-time leading goal scorer recently - they do not command salaries near those of Beckham, Henry and other DPs.

Jureidini believes Jamaica should focus on improving its young talent and not just to fit into MLS, but more lucrative leagues elsewhere. However, he hopes a few will get a chance in MLS via the new rule.

"(The new rule) doesn't say that they (MLS clubs) won't get one or two (Jamaicans). But I don't think that they (the clubs) are gonna come (to Jamaica) for (players)," said Jureidini. "There may be the odd one and I hope that there is.