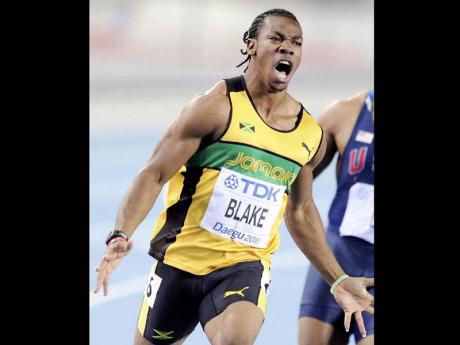 Yohan Blake is enjoying the extra attention that comes with being the 100 metres World champion and main attraction at the Weltklasse meet.

Because Blake's training partner, Usain Bolt, is skipping the Diamond League finals event in Zurich, he has centre stage for his first race after they helped Jamaica set a new 4x100 relay world record in Daegu, South Korea.

Blake won the 100 at the Worlds in 9.92 seconds after Bolt was disqualified because of a false start.

"(Usain) is the big man so you will always get that, but I'm getting credit where I'm due," he said, adding that "when Usain Bolt was my age, he wasn't running times I have run."

Blake will face Asafa Powell, the former world-record holder, who will race at Weltklasse this week for the final time this season, after missing the Worlds through injury.

Powell acknowledged Blake had stepped up to the top ranks.

"He's there, he's won the World Championship," said Powell, who ran a world-leading 9.78 at Lausanne in June, before being sidelined by a hip flexor problem. "It's still very sore. But I'm here to compete."

Powell needs to run in the seventh and final 100 metres of the Diamond League season to qualify for his victory in the season-long standings.

Bolt is skipping the event - dubbed the 'World Championships in Two Hours' - having earlier cited his "strenuous schedule" in Daegu.

Still, Weltklasse organisers have attracted the holders of 19 Worlds gold medals, 18 silver and 15 bronze to come direct from Daegu to compete at the Letzigrund.

Kirani James, the 19-year-old from Grenada, will line up in the 400 metres against the man he dethroned by just 0.03 seconds in Daegu, Olympic champion LaShawn Merritt of the United States.

Jason Richardson of the US can show he is 110 metres hurdles gold medallist on merit against Dayron Robles. The American was unable to celebrate victory on the track as Robles, the Cuban world-record holder, crossed the line first, but was later disqualified for holding back Liu Xiang of China in the adjoining lane.

Pole vaulter Yelena Isinbayeva is on another recovery mission in Zurich after placing just sixth in Daegu. Isinbayeva will face World champion Fabiana Murer of Brazil in a strong line-up.

All eight Worlds finalists in the women's 800 metres, including silver medallist Caster Semenya of South Africa, will meet again.