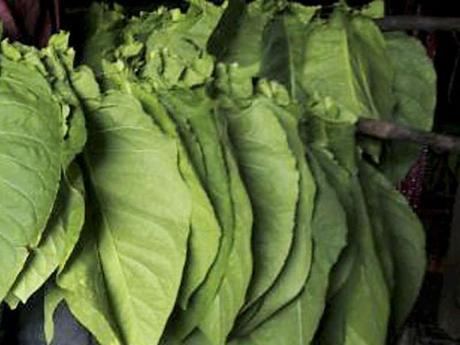 ... Fails to stem cultivation of crop

The Jamaican Government seems set to face censure at a high-level international meeting which starts tomorrow in New York over its perceived failure to stand by its international obligations to stem tobacco cultivation in the country.

A Rural Agriculture Development Authority 2011 study has found that Jamaica is in breach of the World Health Organisation (WHO) Framework Convention on Tobacco Control (FCTC) to moderate cultivation, as hundreds of tobacco farms have sprung up all over the country.

Health Minister Rudyard Spencer is strenuously seeking to fend off accusations ahead of the United Nations meeting, which he is set to attend, that the Government lacks the political will to abide by the treaty.

Jamaica has been a signatory to the FCTC treaty since 2005.

The survey found that tobacco cultivation has expanded unimpeded over the past two years, with many farmers failing to use scientific or technologically advanced measures to determine maturity of the tobacco.

It also revealed that many other farmers are seeking a foothold in the industry because tobacco is raking in big bucks, running into millions of dollars.

The estimated value of the tobacco industry is some J$397 million at the farm gate. Speaking with The Sunday Gleaner, chairman of the Heart Foundation of Jamaica Coalition for Tobacco Control, Dr Knox Hagley, predicted that Jamaica faces embarrassment for its nonchalant attitude to tobacco cultivation when it attends the upcoming upcoming United Nations High Level Meeting on Non-Communicable Diseases scheduled for this month.

Hagley lamented that there is no clear-cut sanction for breaching the treaty, except embarrassment and public outcry.

Agriculture Minister Robert Montague said he was unaware of the effects of Jamaica's obligation under the WHO treaty with respect to tobacco cultivation.

But Spencer said while he had received word that tobacco farming had become a lucrative endeavour in recent years, he was not willing to encroach on the agriculture minister's domain by making far-reaching comments.

Hagley revealed that the failure of the Jamaican Government continues to be a cause for concern at the regional and international levels, with the most recent expression of dismay being an article in the British Medical Journal publication, 'Tobacco Control', on June 25.

The report has found that the number of tobacco farmers has swirled over the past two years, while ganja production is on the decline, even as consternation heightens in international and regional quarters that the Government lacks the will to do anything about problem.

As government representatives prepare to attend the high-level meeting, another challenge that it faces is that the piece of proposed legislation does not specifically address the issue of curtailing the tobacco cultivation in Jamaica.

In addressing the issue of tobacco control, The FCTC treaty that Jamaica signed and ratified in 2005, stipulated, among other things that alternative crops should be provided for the tobacco farmers.

However, the long-awaited legislation does not address the issue of tobacco cultivation.

Experts in the tobacco industry theorise that many of the former ganja farmers have turned their attention to the cultivation of tobacco which produces the increasing popular 'beadie' and 'gabby'.

Spencer, in defending the Government's position, told The Sunday Gleaner that he has encountered a plethora of unforeseen challenges getting legislation before the Parliament over the past four months.

"There is all the will in the world to get this legislation before Parliament. Dr Fenton Ferguson (opposition spokesman on health) supports it, Ronnie Thwaites (an ardent anti-smoking activist) supports it; the Government is anxious to bring it, but a set of circumstances has prevented it up to now."

The minister said the bill was sent to the Attorney General's Department, after which it was dispatched to Chief Parliamentary Counsel's office, who said they were short staffed.

Spencer told The Sunday Gleaner that after a series of back and forth, his ministry finally received the bill.

However, he encountered another obstacle when his legal department decided that it could not be taken to Parliament in the form in which it was completed, forcing the health ministry to send it back to the Attorney General's Department.

After a series of hiccups, Spencer said he expects the bill will reach his hands shortly.