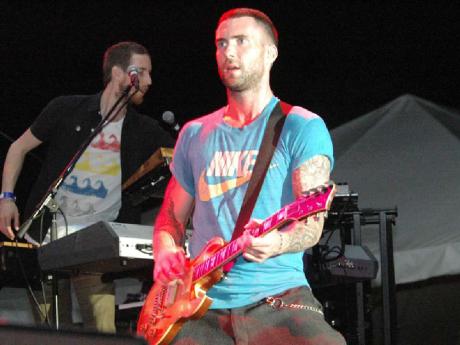 Adam Levine, lead singer of Maroon 5, shows off his versatility on the guitar on the second night of the Jamaica Jazz and Blues Festival at the Trelawny Multi-purpose Stadium in January. - File 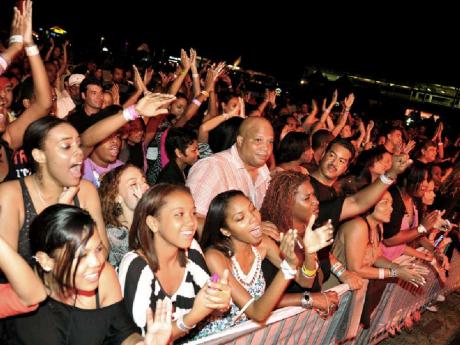 Enthusiastic fans at the Jazz and Blues Festival in January. - File 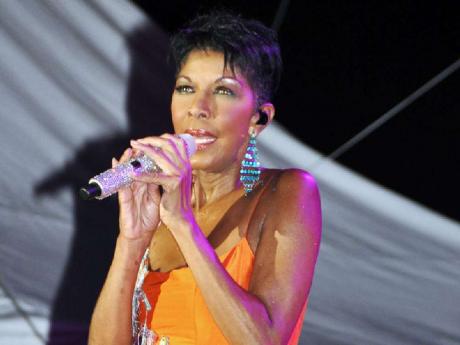 Natalie Cole performs on the closing night of the Jamaica Jazz and Blues Festival in January at the Trelawny Multi-purpose Stadium. - File
1
2
3

An HBO Special spotlighting Jamaica premiered on Thursday at 7:30 p.m. The programme, which showcased the island's landscapes in more than 23 countries, will additionally air in Latin America in November.

The One Love: Jamaica Jazz and Blues Festival 2011 special was a collaborative effort between Flow, HBO, and the Ministry of Tourism.

"With this premiere, we once again show our commitment to the region by producing and investing in Jamaica," said Miguel Angel Oliva, vice-president of public relations and corporate affairs for HBO Latin America Group.

"This being our third production in the Caribbean, we are thrilled to share the island's wonders through the rest of Latin America."

Edmund Bartlett, minister of tourism, welcomed the premiere as a major project for promoting destination Jamaica. The minister indicated that this was a major target area for his ministry and the programme would help efforts tremendously.

"The premiere of this programme is a groundbreaking initiative which will give Jamaica tremendous exposure. It will not only capture the attention of some 300 million viewers in 23 countries across Latin America and the Caribbean, but it will also fuel curiosity about destination Jamaica, after which I am confident many of them will want to visit our beautiful country. I laud this joint effort between HBO and Flow, which will certainly enhance our marketing efforts in the region and significantly boost brand Jamaica."

"This HBO special on the festival serves as a beautifully packaged invitation for viewers to come to the show in January, which will specially feature celebrations for Jamaica's 50th year of Independence," he said.

Flow facilitated the partnership as part of its sponsorship of the Jamaica Jazz and Blues Festival.

"This is part of our commitment to Jamaica - to continue to find avenues for greater exposure through our technology, international partners, and via our various stakeholders," said Michele English, president and chief operating officer at Flow.

English, who also recently launched the new-look Flow TV as a new avenue for local content providers, said that she sees a bright future for syndicated local content. "We are happy to facilitate a new spotlight on Jamaica, especially in the new Latin American market."

She encouraged local producers to look for opportunities in the emerging markets.

One Love invites viewers to enjoy Jamaica's vibe by showcasing its culture, talent, and natural beauty. In between takes of tourist hotspots such as the north coast's Green Grotto Caves and Ocho Rios' Mystic Mountain, the special goes behind the scenes of what it takes to produce the three-day, world-renowned musical event.

Interlacing interviews, not only with local tourists, but also the festival's key planners and artistes, including Maroon 5, Diana King, Natalie Cole, and Laura Isobar, One Love aims to explore how the event captures the richness of Jamaica's sounds and customs.

Starring past performers of the likes of Lionel Richie, Alicia Keyes, John Legend, and Gladys Knight, and attracting over 30,000 patrons worldwide, the festival brings its 15th year of prestige to the island with its 2011 rendition.

One Love centres on the musical event that took place at the Trelawny Multi-purpose Stadium this past January.