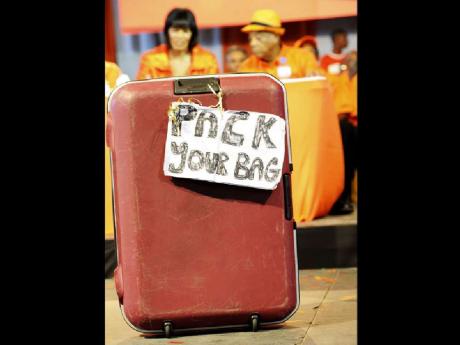 Portia Simpson Miller cannot win. If she had used her massive party conference last weekend to simply rant, ridicule and blast Bruce Golding and the Jamaica Labour Party (JLP), she would have been damned for being negative and not talking solutions. When she proposed some solutions for tackling our unemployment crisis, she was dismissed for merely trying to bribe voters and 'fool up' people.

You wonder how many of our journalists and commentators have even taken the time to read her speech. How could the editorial writer of Thursday's Observer have done so, when he wrote: "The Jamaica Emergency Employment Programme (JEEP), without flesh, sounds like the so-called crash programme of the 1970s." I both listened to the entire speech and read the text. Absolutely nothing suggests a '70s-type crash programme was being proposed. Don't we at least have an obligation to comprehend something before we begin to critique it?

All week the media and the JLP have been focusing on the lack of specifics about the programme and the failure of People's National Party (PNP) spokespersons to say more about it. Bobby Pickersgill had a particularly disastrous interview with Emily Crooks and Naomi Francis on Nationwide. And the PNP has, unusually, not held a post-conference press briefing, feeding suspicions and scepticism that this announcement was just a gimmick, a three-card trick; something thrown at the employment-hungry masses fed up with the JLP's failure to deliver jobs, jobs, jobs.

I cannot fault the JLP, as a political party, for its aggressive opposition and critique of JEEP. Indeed, this reinvigorated, confident and on-the-offensive JLP is welcome in the competitive party political environment, for it should push the PNP from any complacency and sense of entitlement that it might have been harbouring vis-à-vis an easy entrance to Jamaica House. I like the fact, too, that increasingly my media colleagues have been less acquiescent to PNP propaganda lines and have been demanding answers from them.

But the media should not be blindsided by the politicians on both sides and allow them to frame the issues. The overarching issue is not so much the specifics of JEEP - though that is important and the PNP must speak soon. More critical is the strategy for economy development. We are finally seeing some lines of demarcation between the PNP and JLP, and we are seeing a PNP that is staking out its progressive path and going for an activist, interventionist state. And that is not necessarily even a socialist state, as Chris Tufton charged, perhaps polemically to raise red flags. I hope the PNP is not diffident about defending the views articled by its leader last Sunday, because it lacks the conviction for progressive ideas.

The prime minister, in a brief interview with TVJ last week, made it very clear that he was philosophically and strategically opposed to what the PNP leader espoused last Sunday. The prime minister was dismissive of the view that the State should be creating jobs rather than leaving that to the private sector. I have said before that I have been concerned that the prime minister has been sounding very laissez-faire on economic policy, his going as far as saying that "Government is the problem".

It is one thing for the prime minister, as a pragmatist who is highly sophisticated on global affairs, to recognise Jamaica's constraints under the International Monetary Fund (IMF)/Washington Consensus model and, therefore, reject as unrealistic, any view that we can just say ta-ta to the IMF and adopt policies of autarky. But it is quite another thing if he does not have the will - and does not believe that he should challenge - these neoliberal polices which are inadequate to deal with our unemployment crisis and development challenges.

I say, let the debates begin on this matter of the role of the State and that of the market and the set of strategies which can best get us out of our economic mess. In my view, Portia Simpson Miller has put to this nation a set of credible, empirically tested, historically verified and eminently rational strategies.

There is nothing in principle about what Mrs Simpson Miller said last Sunday which the JLP can cogently debate. The PNP's political cowardice in backing off from that parliamentary debate is unworthy of a party with such an intellectual pedigree. The prime minister loves a good debate, so I engage him. (I observed his ecstasy in Parliament on Tuesday as the motion to debate was being hotly debated.) Portia's proposals for economic stimulus loans, tax incentives for the creation of jobs, and tax holidays to encourage entrepreneurship are precisely the policies which have resulted in the success of all the countries which have done well.

The PM said, in his short interview with TVJ, that Jamaica was currently spending billions on waivers and tax incentives and this eats up a significant portion of our gross domestic product. I, myself, was stunned when I read in that March 2010 working paper by the Inter-American Development Bank (IDB) (Productive Development Polices in Jamaica) that Jamaica has 200,000 different incentives - no, that is not a typo, it's 200,000 different incentives - costing us 20 per cent of government revenue.

The IDB, in that paper, made a strong case against these special incentives, showing they have not resulted in growth. The PM would, no doubt, be pulling on facts like these to show the lack of wisdom in the opposition leader's proposal for even more inventives. But Mrs Simpson Miller was not unbalanced or unmindful of the potentially distortional effects of incentives.

For she, herself, acknowledged in her speech that "we need to move away from tax incentives which distort incentive decisions and create an unlevel playing field". What Portia is talking about is a targeted, focused incentive regime tied to specific outcomes. Which is precisely what has been urged in the development literature - and which was used successfully by East Asia during its Economic Miracle.

You see, these things are documented.We have the facts. We have the research. That is how East Asia and Europe grew and that is how Brazil, Chile, China and India are growing today. It is amazing how ahistorical and unscientific the defenders of neoliberalism are. The World Bank itself published that eye-opening book in 1993, titled The East Asian Miracle: Economic Growth and Public Policy, which demonstrated how the East Asian Tigers - Japan, Taiwan, South Korea and Hong Kong - used public policy, and especially in the cases of the first three, an activist state in guiding economic growth.

This myth that all you need to do to grow an economy is to have low inflation, low interest and foreign exchange rates, high net international reserves and general macroeconomic stability is just that - a myth. Macroeconmic growth is necessary but not sufficient for sustained economic growth.

Jamaica has made significant achievements in key macroeconomic targets, but these have not translated into jobs and satisfactory standards of living improvements. That is not just because of the recession. These strategies, by themselves, are not enough to produce growth, and this JLP Government had better realise that for its own good and the good of all of us. Let's look at the hard evidence.

Japan used state interventionist polices to spur growth. There was state-directed financing of industry; subsidies for exports, support for marketing, research and development, etc. Economists like Dani Rodrik, Joseph Stiglitz, Ha-Joon Chang and others have demonstrated this amply. An excellent book to read to show what East Asia did to achieve its spectacular growth - and to demonstrate how it used an activist, developmentalist state - is Industrial Policy in an Era of Globalization: Lessons from Asia by Professors Marcus Noland and Howard Pack. It noted that the Washington Consensus ideologues disregarded "some important aspects of Asian policy, particularly the considerable intervention that had occurred in product and factor markets".

Singapore today produces 20 per cent of its output through state-owned enterprises, while the international average is 10 per cent. France, Austria, Finland and other European countries have heavily used state-owned enterprises to promote key industries. Ha-Joon Chang says in his recent book, 23 Things They Don't Tell You About Capitalism, that "having been repeatedly told that free-market policies are best for economic development, (people) would find it mysterious how most of today's countries could use all those supposedly bad policies - such as protectionism, subsidies, regulation and state ownership of industry - and still become rich".

Rodrik, in his book, The Globalization Paradox: Democracy and the Future of the World Economy, demonstrates how East Asian countries used the state to work with business to create economic growth. Of South Korea and Taiwan, he writes: "Equally important were interventionist policies - government incentives designed to stimulate investments in modern manufactures. In South Korea, these took the form of subsidised loans administered through the banking system. In both countries, bureaucrats played the role of midwife to new industries: they coordinated private firms' investments, supplied the inputs and provided sweeteners when necessary."

Go back and read Portia's speech. These are things she was talking about, not people leaning on shovels like the 1970s. Even though a public works programme is important and was used successfully by FDR after the Great Depression in the 1930s.

If, as the prime minister said recently, this recent recession is worse than the Great Depression, what is so objectionable about an emergency national-intervention programme to rescue especially unemployed youth, whose frustrations could disrupt any macroeconomic programme?

Portia's JEEP is on the right track, though how much fuel it has and how many passengers it can hold are details to be worked out But it's time we travel down the right path, rather than traverse blind alleys.  Bring on the debates!