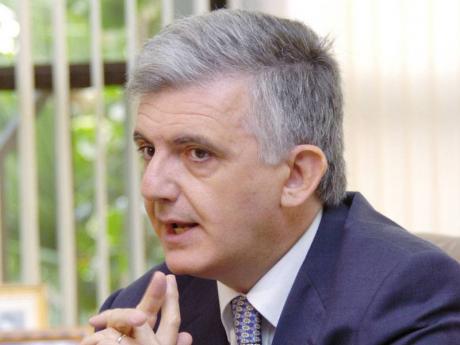 Ambassador Marco Mazzocchi Alemanni, head of the delegation of the European Commission/European Union, said a speedy resolution on issues such as tax reform and reduction of the public-sector wage bill could serve as an incentive for Jamaica's development partners to re-engage and calm jitters among ratings agencies.

"We all agree that the public-sector wage bill needs to be reduced," said Alemanni, addressing the Private Sector Organisation of Jamaica Chairman's Club forum in Kingston.

"Since salaries have been raised, this could be done by taking a decisive and plain approach on attrition example by establishing that, within each monthly period, only two or three public sector vacancies out of 10 will be filled, and that others would be permanently frozen," he said.

But this, Alemanni said, would only be a first step as other wage restraints were required, though he did not elaborate on what those measures were.

He also urged that the tax-reform process be wrapped up by the end of the financial year.

"A strong commitment on these two measures could be, I believe, an excellent incentive to international development partners to rapidly re-engage, thereby dispelling any possible risk of rating agencies becoming jittery about the stalemate, with possible repercussions on interest rates and exchange rate," he said.

A discussion paper on tax reform has already been tabled in Parliament and a special committee chaired by the finance minister has been formed to review submissions and agree the framework for the legislation in the form of a White Paper. The Golding administration is working with a 2012 deadline to implement the new tax system.

Alemanni said disbursement of European Union funding has ceased until Jamaica re-engages with the IMF.

"We have already declared that we have to wait for Jamaica to re-engage with the IMF in order to continue disbursing our own funds in terms of budgetary support," the EU ambassador told Wednesday Business.

"We have a considerable amount of funding between now and the end of the financial year in the vicinity of US$70 million in grants for the budget, and part of the funds are quite ready to disburse as soon as the IMF issue is settled," he said.