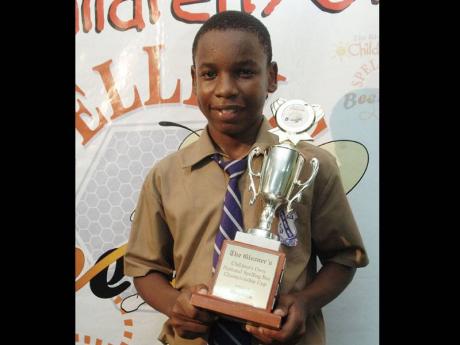 It was a pint-size powerhouse who stole the show at the Kingston final of The Gleaner's Children's Own Spelling Bee on Wednesday afternoon.

Gifton Wright of Kingston College was crowned champion for a second consecutive year after more than three hours of gruelling competition at the Bethel United training complex, South Camp Road.

This spelling battle was rendered fierce by the presence of eight-year-old Chaunté Blackwood.

The Wolmer's Preparatory student matched the field of 20 other spellers like a pro, though she has only been spelling for two months.

"She joined the programme in July," coach Reverend Glen Archer shared with The Gleaner, further stating that they had only once-a-week training until September when it moved up to three times per week.

This might be considered a short time for any speller to get to the top 10, let alone top two, but Archer revealed that Chaunté was easy to train.

"It was excellent working with her ... . She is very easy to train and responds very well."

It doesn't hurt that Chaunté enjoys spelling. Her passion for the discipline made her a formidable force to be reckoned with.

But Gifton was never scared.

"I was confident in myself," the 13-year-old disclosed. "I love Spelling Bee."

That love for the competition has motivated Gifton to continue on, hoping to be the national champion next year.

"I will win. That's my main goal; I'm gonna win," he boldly declared.

And for veteran coach Archer, it would not stop there. He thinks Gifton can give him a good shot at another Scripps title before he retires.

As for Chaunté, she is just basking in her superb finish and looking forward to coming back next year.