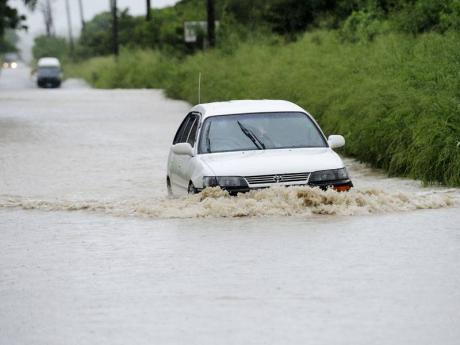 A motorist drives along the flooded main road to Morant Bay adjacent to the Belvedere Farms in St Thomas yesterday. 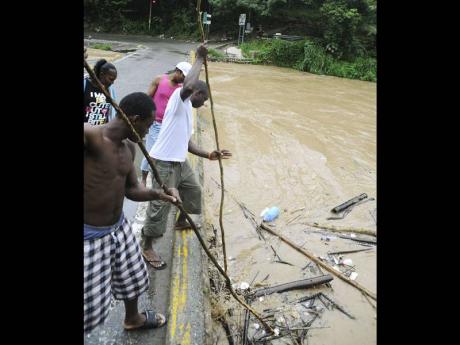 These young men attempt to clear debris from the rising Rio Cobre at the Flat Bridge in St Catherine yesterday. - photos by Ricardo Makyn/Staff Photographer
1
2

Heavy rains lashing the island for the past two days have left several areas flooded.

As the rains continued, the Meteorological (Met) Service issued a flash-flood warning for low-lying and flood-prone areas of all parishes.

Satellite images showed a large area of disturbed weather associated with a broad area of low pressure across the western Caribbean, including Jamaica. The Palisadoes main road in eastern Kingston was flooded and motorists travelling in small vehicles were warned to avoid the strip of land that was the only connection to the Norman Manley International Airport and Port Royal.

In St Thomas, several roads were left impassable. Motorists were advised to avoid Audley Crossing in Golden Grove, the Airy Castle to Bath main road, and Roselle in Morant Bay.

In St Catherine, motorists were not allowed to enter the Bog Walk gorge as the Rio Cobre continued to rise, threatening to overflow the roadway.

Meanwhile, the heavy rains and bad road conditions in the Johnson Mountain area of Eastern St Thomas almost claimed the life of a resident yesterday.

According to reports, Nicholson Gould, 32, was out in the rain repairing a broken pipe in his backyard when the heavy rains triggered a landslide. Gould was caught in the land slippage and a bamboo pole gouged his side and leg causing him to bleed profusely.

Residents rushed to his rescue but found him badly injured and slipping in and out of consciousness. They managed to get him from Johnson Mountain to Wheeler Field where they discovered that they were blocked in from both sides because of the rain and poor road conditions.

Residents sought the assistance of Dr Patrece Charles, the caretaker/candidate for the area, who contacted the Jamaica Defence Force and the Office of Disaster Preparedness and Emergency Management, who facilitated the injured man being flown to the University Hospital of the West Indies for treatment.