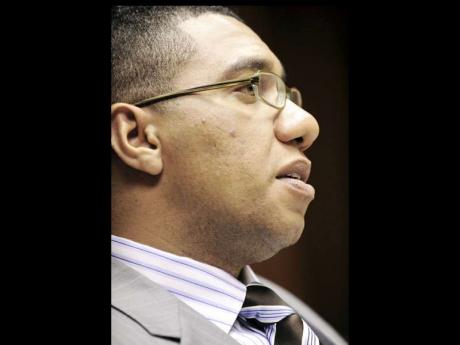 The spotlight will today be focused on the lawns of King's House, the governor general's official residence and the scenic setting where Andrew Holness is set to create history when he takes the oath of office as Jamaica's ninth prime minister.

Holness will, at age 39, become the youngest prime minister of Jamaica and a member of a small band of youthful politicians in the region to shoulder the weight of supreme leadership in their countries' political structures before they reached the age of 40.

The Jamaican politician joins Bharrat Jagdeo, who became Guyana's president at 35 in 1999, and Roosevelt Skerritt, who took up the reins of prime minister of Dominica at 32, back in 2004.

Outgoing prime minister, Bruce Golding, last week fast-tracked the remainder of his governance-reform agenda through Parliament, paving the way for the third-term parliamentarian, who has served as leader of government business in the House of Representatives, and by extension, the man responsible for electoral matters in that chamber, as well as the all-important education portfolio.

Many Jamaicans are seemingly hopeful, yet apprehensive, about the prospect of the young politician assuming the challenging mantle of leadership. "You think him ready for it yet?" is a question that lingers on the lips of many who walk the streets.

If the swearing-in ceremony of Holness' predecessor, Bruce Golding, four years ago, serves as a guide, today's affair is likely to be attended by the three living former prime ministers, as well as the outgoing one.

Former prime minister-turned-elder statesman, P.J. Patterson, is likely to be in attendance as he was on September 11, 2007, on Golding's big day.

Portia Simpson Miller is also likely be there to extend a congratulatory embrace before engaging in the battle royal that is expected after the new prime minister is sworn in.

It will be the first time that Governor General Sir Patrick Allen will have the honour of presiding over the swearing-in ceremony of a prime minister since he took office three years ago when Sir Kenneth Hall stepped down.

Within the camp of the JLP, it has been a week of anticipatory celebrations, countered only by the feverish activities of senior members as they sought to clean house in time for Holness' elevation.

The effects of Golding's bombshell announcement last month of his resignation seems to have been all but forgotten as old and young in the JLP have rallied in support of Holness, with many quashing their own leadership ambitions - at least for the time being.

By their pronouncements, the people who were divided into at least two factions under the Golding leadership have decided to call a truce - at least for now.

With Dr Christopher Tufton, Mike Henry, Karl Samuda, Everald Warmington, Robert Montague, and Harold Brady, among others, dispensing of their personal positions to emphasise their support for Holness, the new prime minister can rest in the knowledge in the coming days that the more experienced and the influential have his back.

Generation 2000 (G2K), the youth affiliate group of budding professionals that is affiliated to the JLP, is also firmly hitched to the wagon.

President Delano Seiveright has been at pains to point out that he had long endorsed the thrust for fresh leadership. "I have long been pushing for leadership change in our country. As a matter of fact, three weeks after being first elected president of G2K, I attended a Gleaner Editors' Forum on the subject matter in December 2009."

The Gleaner reported on December 10, 2009, that "Seiveright is of the view that Jamaica would only extricate itself from the mire in which it had found itself by engaging young professionals to assume the mantle of leadership".

Added Seiveright: "For the most part, leadership has been a failure … . The older generation of leaders will not change. We need to use a cadre of young professionals, who are unshackled by the past, to bring about change."