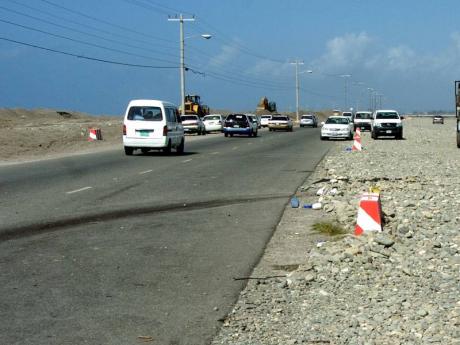 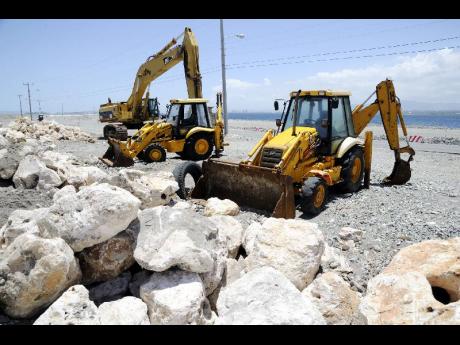 There are indications that trouble is again brewing on the multibillion-dollar Palisadoes Shoreline project as subcontractors who had abandoned primary subcontractor, YP Seaton, and defected to main contractor, China Harbour, are once more up in arms over money.

Subcontractors, some of whom have already walked off the elaborate, trouble-prone project, told The Gleaner yesterday that they wanted Transport and Works Minister Mike Henry to intervene and bring some resolution to their concerns.

However, Henry told The Gleaner last night that he has received no report of any problem associated with the work being carried out on the Palisadoes Shoreline.

"Subcontractors know the process by which they are being paid ... they should have a contractual arrangement in place," Henry said. "And payments are supposed to be made after the work and quality of material supplied is certified."

He said if any problems arise, subcontractors should communicate them in writing to the National Works Agency (NWA) or his ministry.

However, the subcontractors with whom The Gleaner spoke said a new payment dispute surfaced only weeks after Seaton complained strenuously on the airwaves that he was unable to pay them as he was not being paid by China Harbour, which he said had failed to live up to its end of the arrangements.

As Seaton did more than a month ago, the subcontractors are now accusing China Harbour of grossly underpaying them to carry out their jobs.

The Gleaner had reported that there was a US$5-million discrepancy involving work done and funds to be paid to Seaton by China Harbour.

A subsequent meeting failed to bring a resolution to the dispute and Seaton was sacked as primary subcontractor.

After terminating the contract with Seaton, China Harbour had entered into a contractual arrangement with truckers and local suppliers.

But subcontractors claim the rates being paid by China Harbour are not viable and they are now being forced to withdraw their services.

"We want a meeting to renegotiate the contract," asserted a subcontractor who asked that his name be withheld for fear of being "sabotaged by the political process".

Another subcontractor told The Gleaner that an increasing number of the subcontractors were laying down their tools because they were unable to finance their obligations.

"I have to be paying my workers as they have children to go to school," he told The Gleaner.

Yet another declared: "I have stopped working for six weeks now as we are being crazily underpaid ... the money for one ton is $13,000, but some people getting as low as $2,000 per ton."

A subcontractor told The Gleaner that the lack of adequate payment has triggered a chain reaction and "they are simply unable to pay the people they have employed or contracted to operate the heavy equipment, as those who supply and deliver boulders and river shingle packing stone ... they just can't pay their bills, it is no joke."

Another source close to the Palisadoes project revealed that the rates being paid to China Harbour by the Government varies between J$6,000 and J$13,000 per tonne for material that is delivered.

"They are only paying between $1,100 and $1,700 to supply and deliver the material," the subcontractor told The Gleaner.

Suppliers are claiming that these rates will not allow them to replace their trucks and equipment which are prone to be severely damaged, due to the hazardous nature of the work.