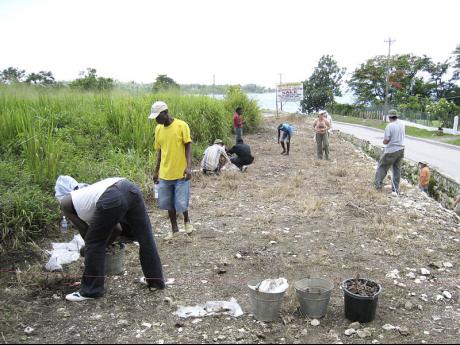 Members of the Bluefields community in Westmoreland and visiting archaelogists searching the Taino midden which was discovered in 2007. 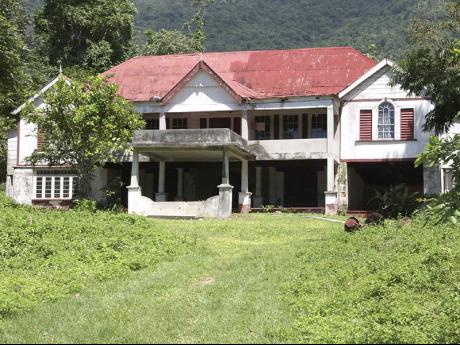 The Bluefields Great House, built in the 1800s, was the place where persons such as Henry Morgan and Philip Henry Guss, Jamaica's first ornithologist, who stayed there between 1844 and 1846 and studied the flora and fauna of the Bluefields area. Guss also wrote three books from this location - 'A Naturalist Sojourn to Jamaica', 'Birds of Jamaica' and 'Illustration of Birds of Jamaica'.- File 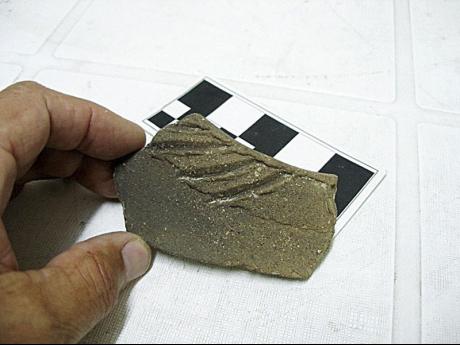 WESTERN BUREAU:Crafting an alternative model of resort development, the citizens of Bluefields, Westmoreland, are opening up their Taino artefacts to the world.

Their latest project comes four years after a Taino site and an early colonial-era blacksmith's shop were found in the area. The site was discovered in 2007 when bulldozers disturbed it during a housing development. "There were earth-moving activities associated with it and that's what made it visible to the residents," reveals PhD archaeology student Heidi Savery of Binghamton University, New York.

Savery, a Fullbright Scholarship recipient, is on the island working with the project for the next year. She has been intimately involved with the quiet heritage tourism community since 2008.

The Tainos are Jamaica's first inhabitants, dating back to 1200 AD; however, the archaeologist points out that very few Jamaicans claim their heritage, even though their impact on the country was enormous.

An archaeologist dream, the find came from a midden (garbage dump). It includes broken pieces of pottery vessel, griddles where the Tainos would make their cassava cakes, stone and shell tools, adornments mostly made from shells, and most importantly, remains of their diet.

"Animal bones, marine resources, essentially the remains of their dinners, are some of the things we have found," said Savery, adding that they are digging through Taino garbage; hoping to find remnants of structures and their living spaces.

"We can even determine the kind of plants they were using," she argued, noting that the artefacts have been placed at the Bluefields Community Centre.

Currently, the site, which is located on a private property, is directly threatened by housing development. "But the landowners have been very supportive of the project," she added.

In addition, there is also a blacksmith shop, where all sorts of iron and copper materials were found, "There are two distinct markings on the ground that tells us something was there. The shop cuts into the Taino site, both of them are across the road from the Bluefields Tavern (an intersection that has been there for centuries)," said Savery.

Come January 2012, an excavation team from a number of universities in the United States will meet up with local experts to delve into the historical gold mine that the citizens are sitting on.

The trip complements the plans for the area by the Bluefields People's Community Association (BPCA), a community-based organisation which has been in operation for over 20 years.

"We have a very different vision for tourism, determined to create an alternative model to the overdevelopment that has plagued north coast resort areas with adverse environmental and social impacts," Wolde Kristos, BPCA chairman said.

Geographically, Bluefields is a string of small communities on Jamaica's southwest coast, one of the islands oldest settled areas. With a narrow coastal plain, the large bay is surrounded by a wall of mountains rising to over 2,000 feet, making for a dramatic setting.

Ecologically diverse with abundant freshwater and marine resources, Bluefields has always been a fishing community "since early, before slavery times".

"The potential for the activities of both archaeology and tourism of the Bluefields area is widely recognised," states Kristos.

Kristos says the Bluefields Archaeology Project is strategically aligned with these research communities, united under an official local development vision.

The Archaeology Project's approach to heritage management in Bluefields is in keeping with the community's 20/20 Challenge, designed to support the Bluefields Development Council's efforts to achieve sustainable development of bay area communities by the year 2020.