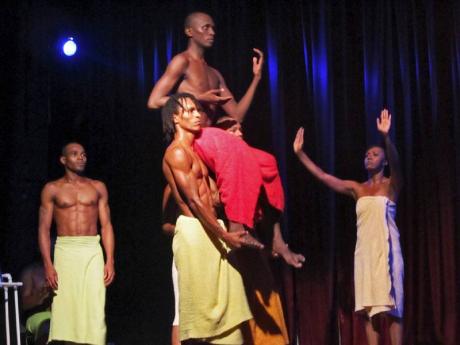 Dancers perform the 'Homenaje a San Pacho' during the Colombian dance company SANKOFA's performance at the Edna Manley College of the Visual and Performing Arts on Friday. - Photos by Marcia Rowe 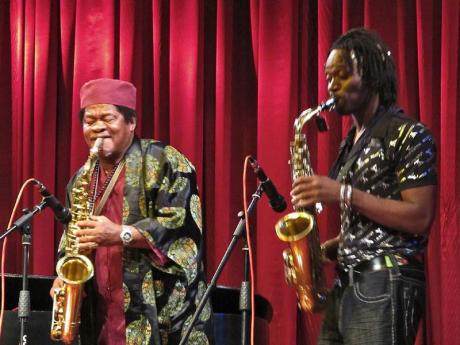 Michi Sarmiento of Colombia (left) and Conrad Pinnock of Jamaica, perform during Colombian dance company SANKOFA's presentation on Friday at the Edna Manley College of the Visual and Performing Arts. 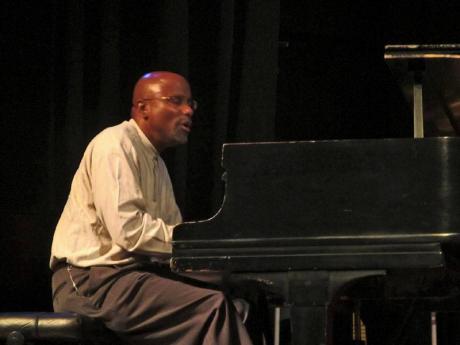 With its high-end performance and strong cultural lesson, the programme was too short.

From start to finish, Jamaicans and Colombians alike were appetisingly entertained. And the credit goes to the Colombian dance company SANKOFA. SANKOFA comes from an African phrase that means to go back to the roots. Fittingly, the dance drama illustrated just that.

Like all occasions of its ilk, the programme began with the singing of the anthems of both Jamaica and Colombia. The anthems were followed by a welcome from Luis Guillermo Martinez, Ambassador of Colombia.

Then it was handed over to the performers to deliver what was described by the Colombian representative as a "musical" San Pacho - Bendito.

In the absence of any form of dialogue - and the emphasis seemed to be on dancing - dance drama would have been a more accurate classification.

San Pacho - Bendito is divided into three acts. According to the programme note, "Sanco is an alibi for a return to the hometown, for a reunion."

The returnees are those who migrated for economic reasons, but on their return they must celebrate in an "unchanged place where the necessities are still unmet".

There is no protagonist in the story. Instead, the emphasis is on the characters reimmersing themselves into life as they knew it.

The first act, Cuando Chano Esaba Grabando, authored by Feliciano Ramirez was intriguingly different and served as the perfect preamble.

A lone singer, with a blank expression sets the tone of the production. He beats the rhythm of his song on what appears to be a large silver baking pan. A young woman emerges with a plastic basin and begins to wash. Gradually the stage is taken over by musicians who pick up the tempo with drums and flute. Two young men, who appear to be playing a game of cards or dominoes (no props were used), joined them. And the last of the eight characters arrives in the form of a girl who obviously has had too much to drink, but still wants to party.

After much dancing with one of the movements looking akin to the Jamaican 'dutty wine', the very creatively and well-danced act ended with a young lady vomiting in a very large bag.

It was evident that author Jose Luis Perea was not interested in hiding the proverbial skeletons in the closet in Zukunduko.

And choreographer Rafael Palcios seemed more than ready to oblige. In the most innovative and interesting scenario, the dance was more than engaging.

It begins with the characters wearing bath towels wrapped around them. Each carries a plastic pail. Then the beauty or intensity of the dance drama unfolds. The unchanged place becomes more evident. Through dancing, accompanied by vocal sounds, the versatility of the pail was demonstrated: the pail as a utensil for a bath, as a latrine, for catching water from leaking roofs as well as for drinking. The vocal sounds were supported by the sounds of the drums or flute.

But the most exciting and creative dance movement was one best described as 'mosquito rhythm'. The dance begins with a slow but steady beat, created by the dancers clapping at mosquitoes in the air, while stomping their feet. Then it moves into a faster, beautifully coordinated clapping of hands and stomping of feet.

"Jamaicans would love this one," voiced a female member of the audience, obviously moved by the creativity of using such basic actions to create not only dance movements but also to tell a story.

The final movement or act was written by Hansel Camacho and titled 'Homanenaje a San Pacho'. It was just as gripping as the previous two acts. But its strength was more in the level of endurance showed by the performer who seemed to symbolise San Pacho.

The combination belied the fact that the two groups had only met earlier that day.

They gave stirring performances of Bob Marley's No Woman No Cry, Sly Mongoose, Wave by the Brazilian Jobin, with Hammond on piano and Pinnock and Michi on saxophone.

The trio ended its amazing performance with Minchi's Antonia.

At the end of the programme The Gleaner spoke, through interpreter Martha Corbett-Baugh, to a very excited ambassador.

Martinez, who is only in his fourth month in Jamaica, said among other things, the decision to put on such an event was because it was very easy to use the language of music to understand each other.

He referenced the fantastic performance by the trio, Hammond, Pinnock and Michi as an example. He promises more cultural exposure. He hoped to also make a contribution to Jamaica's upcoming 50th anniversary celebrations.

The collaboration between the music of Colombia and Jamaica took place on Friday at the School of Music auditorium located on the campus of the Edna Manley College of the Visual and Performing Arts.