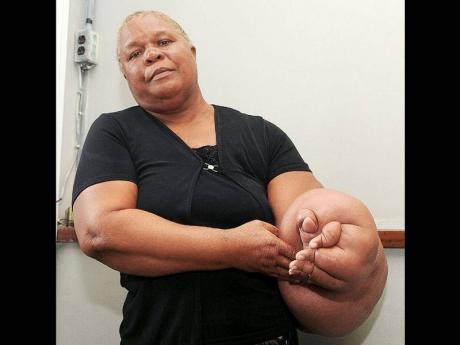 Melrose Pusey shows her left arm that has continued to swell since she did chemotherapy. - Ian Allen/Photographer

As we continue to track our story titled: Melrose Pusey's dilemma, first published in Flair three weeks ago, we are pleased to inform our caring readers that help continues to pour in for Mrs Pusey.

Last Wednesday, a kind reader, Violet Mahfood, donated $10,000 and local medical expert, Patrice Dwyer, certified lymphedema therapist, met Mrs Pusey and after a consultation, she told Flair that Pusey's case is treatable. She placed the order for the materials needed for the treatment. So we are moving closer to getting Mrs Pusey some relief! With some help from Mrs Pusey's daughter and a donation from The Gleaner's editorial department, we will be able to pay for the items needed to treat her.

Flair says a big thank you to Nadeen Matthews who pledged US$100 towards the cost. Coincidentally, she was in a meeting with Dwyer last week and handed over the money. Both are sorority sisters in the Jamaican chapter of Delta Sigma Theta Sorority, and Matthews said, based on their conversation, there is an educational opportunity here for the Jamaican public, as well, beyond the care for Mrs Pusey. Dwyer ordered the items from her own credit card.

Meanwhile, Mrs Pusey comes close to tears when she speaks about the help she has been receiving since Flair first aired her story. She is full of gratitude and prayers for everyone who has called, written and sent help for her.

The total is US$288.92 and an additional sum for shipping and customs costs. The order was placed at the Academy of Lymphatic Studies http://www.acols.com.

The term lymphedema comes from the lymphatic system, which helps coordinate the immune system's function to protect the body from foreign substances and includes an extensive network of lymph vessels and lymph nodes. Here's how the lymphatic system works:

Excess fluid is collected from the space between tissues in the body and moves through the lymph vessels. The fluid (now called lymph) isn't pumped through the body like blood, but instead is 'pushed' through the lymph system as the vessels are compressed by surrounding muscles. Filters called lymph nodes remove certain harmful substances from the lymph fluid, such as bacteria and debris. The fluid from most tissues or organs is filtered through one or more lymph nodes before draining into the bloodstream.

Lymphedema is an abnormal build-up of fluid that causes swelling, most often in the arms or legs. The condition develops when lymph vessels or lymph nodes are missing, impaired, damaged, or removed.

There are two types of lymphedema: primary and secondary.

Primary lymphedema is rare and is caused by the absence of, or abnormalities in, certain lymph vessels at birth. Secondary lymphedema occurs as a result of a blockage or interruption that alters the flow of lymph through the lymphatic system and can develop from an infection, cancer, surgery, scar-tissue formation, trauma, deep vein thrombosis (a blood clot in a vein), radiation, or other cancer treatment.

4. Combined cancer surgery and radiation therapy to a lymph-node region (such as the neck, armpit, groin, pelvis, or abdomen).

5. Radiation therapy to a lymph-node region.

Lymphedema develops after breast surgery because there is an alteration in the pathway that drains the fluids involved in the immune system. It can occur at any time after the surgery. If untreated, it can become worse.

Following breast-cancer surgery, a doctor will examine you and take arm measurements. Sometimes, there may be redness or pain in the arm, which may be a sign of inflammation. Depending on your symptoms, your physician will then consider the best treatment options for you.