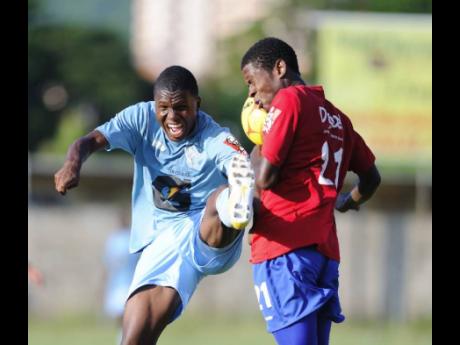 St George's, who are looking to reclaim the title they surrendered to Jamaica College last season, moved one step closer to the semi-finals after stopping Camperdown 2-0, while Calabar, whose last taste of victory was back in 2005, scored a 4-0 win over Penwood.

"I am happy with the result. We didn't play particularly well in the first half, but in the second we did what we wanted to do, and for that I am happy," said Bell.

"We will now turn our attention to Calabar in our final group game, which should be another test for us," he declared.

The Georgians, who lead the group on goal difference with one round of matches to go, were led to victory on a double from the diminutive but impressive forward, Kendon Anderson.

Anderson first scored in the second minute when, showing good awareness, he beat Camperdown's offside trap and side-footed past Rushaun Patterson in goal.

He then added his second and the assurance goal in the 69th minute when in almost a similar move, he used his speed and skill to telling effect to beat one defender and placed his shot outside the reach of the otherwise outstanding Patterson.

"We started a bit slow and were further hampered by an injury and withdrawal of our main defender," said Camperdown's coach Christopher Bender.

"But all in all, St George's College is a better team all-round and they played the better game on the day. Congrats to them," he added.

The win moved St George's to a maximum six points, the same as Calabar, who having scored six and conceded one goal, has an inferior record to the Light Blues' six goals-for-and-none-against record.

Calabar, meanwhile, were led to victory courtesy of a brace from Kyle Scott (56th, 61th), while Paul Newman (16th) and Saskie Daley (22nd) were the other scorers.

"St George's have proven that they are a tough team, as we got 5-0 from them in the Walker Cup knockout," said Calabar's coach Marvin Tate, looking ahead to the clash.

"However, we are very positive that we can give a good account of ourselves, as unlike the Walker Cup, we have no injuries and will be at full strength," he pointed out.

The competition will continue today with action in Group I.

Wolmer's Boys will play Ascot High in the first game of a double-header at the Spanish Town Prison Oval, while in the second game José Marti will take on Hydel.

The second round is divided into four groups, with the winner of each earmarked to play in the semi-finals.