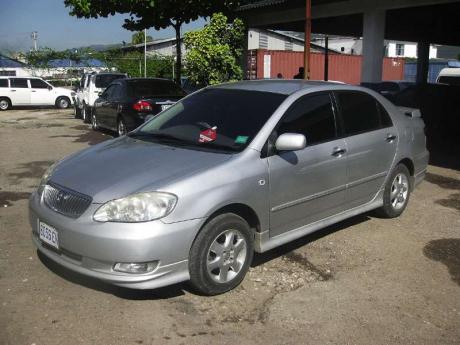 The Toyota Corolla Altis brought into Jamaica as a 2007 vehicle, but actually made in 2004, at the centre of last week's story. - File

Last week's lead story 'Right car, wrong year', about a customer purchasing a Toyota Corolla Altis after being told it was a 2007 vehicle then finding out that it is actually 2004, sparked strong responses. Here are some of them, with the dealers' names omitted.

I, too, share the same sentiments about a Toyota Altis that I bought. My car was sold to me as a 2006 model, only to have an evaluation done to reveal that the car is 2004. I, too, went to the Island Traffic Authority who confirmed that the vehicle is a 2004 model. I approached the dealer who told me to take in the vehicle's documents and he will have the papers changed, so I asked what about the difference in the price of the vehicle. He advised that I would have to stand half the cost of the difference in the year of the vehicle. To that I was surprised, because I wanted to know why I should stand the difference when I had nothing to do the car being the incorrect year.

I had to get the papers changed because the valuation was different from the fitness and registration documents.

I don't believe that the consumer should suffer at all. After all, we are the ones stuck with higher monthly payments to the bank, higher insurance fees and a reduced value of a vehicle bought just over a year ago.

My situation is no different from your Arthur Spencer. I am a government worker. I got my 20 per cent concession and purchased a 2006 Toyota Corolla Altis. This happened in November 2009. I got my loan approved at my credit union and the vehicle insured.

I was happy, car was happy, family happy. By the November of 2010, I went to have the car valued at the same valuator who did the first valuation and, to my dismay, I was told that the car is a 2004. I too contacted the Consumer Affairs Commission. They wrote the Island Traffic Authority and the response was the same.

The long and short is that I now have a car that is :

I had a difficulty licensing the vehicle this November, because the Tax Office still has my vehicle on the system as a 2006. They gave me a handwritten registration ticket because they cannot print due to the fact that the system records it as a 2006. This can only be changed by Customs and I understand that they will not change it.

We really need help and I believe the media is the only way to deal with it.

I bought a Nissan Cefiro 2007 in July 2011 and shared the same experience. The loss adjusters (the dealer used) valued the vehicle as a 2007. I went to insure the vehicle at my insurance company and the valuator was not one of the insurance company approved valuators, so I took it to MSC McKay in Portmore who discovered that the vehicle was maufactured in late 2003 and is registered as a 2004. The Island Traffic Authority also confirmed that it was a 2004 model.

I went back to the dealer, who told me to look at something else, then changed his mind. So I informed my credit union, which is taking legal action against the dealer. My credit union stands to lose. I stand to lose, because how does the dealer expect me to stand the loss of $600,000? This is ludicrous and I'm still livid.

This morning (Monday, November 7) when I came in office I was made aware of the article you wrote. My co-worker thought it was I whom you wrote about. I, too, have the same issue currently sorting out. It started out when I went to do a valuation on my 2006 Nissan Sunny bought in October 2010.I had done the valuation in time to renew my insurance, only to get a valuation saying my car was actually a 2004 model, and the value significantly less.

I immediately contacted the valuators, MSC Mckay, to point out the error; I was sure they had made one. I was offered verification by the valuators and reassured that they have the correct information. I then contacted the dealer, who told me that I shouldn't take MSC McKay's word as final. Instead, I should contact the Island Traffic Authority (ITA). That I did and was directed to lodge a complaint with the Consumer Affairs Commission (CAC), where I got a letter to take back to the ITA. The car was verified and confirmed that the car was actually a 2004 model, with a manufacture date of October 2003. This was communicated to both the CAC and the dealer.

In an initial conversation with the dealer since the confirmation by ITA,he said he can't take the blame for this and will speak to Mr Clive McDonald at the ITA and something to do with the Trade Board. He was supposed to call me back on Friday, November 4, but didn't.

Based on the experience of at least one co-worker who is facing the same dilemma, and from utterances from both the valuators, ITA and CAC. It is quite widespread.