World Athlete of the Year - Bolt surprised, encouraged by award 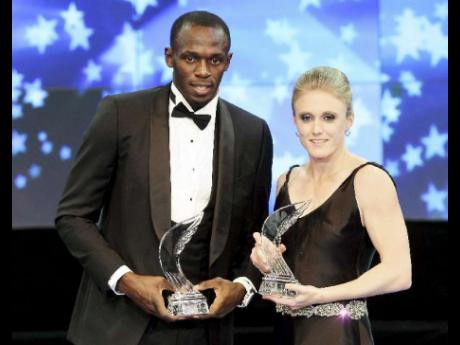 Jamaican sprinter Usain Bolt (left) and Australian hurdler Sally Pearson stand with their Athlete of the Year Awards yesterday in Monaco, after they were awarded by the International Athletic Foundation, during the 2011 World Athletics Gala Awards. - AP Photo/Claude Paris

Usain Bolt yesterday walked away with his third World Athlete of the Year award, but for the big Jamaican, none of the previous triumphs means more to him than the one he won at last night's International Athletics Foundation Grand Gala, inside the Salle des Etoiles here in Monaco.

The Jamaican is now the second man in history - after Morocco's Hicham El Guerrouj - who has won the prestigious award on three occasions.

Jamaica's Yohan Blake won the Performer of the Year Award for his stunning 19.26-second 200m clocking - the second fastest time in history - at the Memorial Van Damme Diamond League meeting at the King Baudouin stadium in Brussels on Friday, September 16.

Bolt, the 100m and 200m world-record holder and Olympic champion, admitted to being surprised at winning this time around, given the difficulties he had to endure; and also stated that this recognition has served to motivate him to go out and push even harder for the coming season.

Australian sprint hurdler Sally Pearson walked away with the top female award after her 100m hurdles victory at the recent IAAF World Championships in Athletics in Daegu, South Korea, which came at the end of a blistering 12.28 seconds run - the fastest time for the discipline in 19 years.

"Hands down, this one definitely means more to me than the previous ones," said Bolt, who won ahead of compatriot and training partner Yohan Blake, who was a first-time candidate, and Kenyan 800m world-record holder David Rudisha, last year's winner of the award.

"This season was a really trying one for me, I really had to work hard to stay on top of my game and there were some really close races this season," added Bolt, whose other World Athlete of the Year triumphs came in 2008 and 2009.

"I really had to push myself and there were a lot of ups and downs throughout the season, so for me it means a lot that the fans and the IAAF saw the work that I put in and saw it fit to name me Athlete of the Year," Bolt told The Sunday Gleaner. "I am extremely proud of myself, this means a lot to me and it has motivated me even more to work harder and to enter this coming season with even greater fight."

In addition to winning the 200m title in Daegu with the fifth-fastest time in history, Bolt ended the season as the fastest over 100m (9.76) and was a member of Jamaica's world-record breaking 4x100m World Championships team.

"I've already got two cars this season, so I really don't know what I'm going to do with this money, I have to put some thought into it because it was not really expected, I'll probably do something for myself with this one," Bolt smiled while rubbing his palms together.

Pearson, 25, who lined up in an amazing 40 races (60m, 100m, 200m, 400m) last season (not counting three relays), also boasts 15 victories in the 100m hurdles on the international circuit and unlike Bolt, knows exactly what she will be doing with her cash prize.

"I just bought another house so I'll probably be paying my mortgage off," she laughed, before noting that she is hopeful that her victory will further boost the sport back home.

"It's pretty amazing because we struggle in Australia with our sport so when I can do this for my country and my region it means a lot and, hopefully, it can inspire other athletes from my region at the junior level and senior level," said Pearson, who won ahead of Vivian Cheruiyot and Valerie Adams.

Interestingly, both Bolt and Pearson were World Junior champions back in 2003 and both athletes won their respective events in Daegu from lane three.

The awards were presented by Honorary President of the IAF, HSHPrince Albert II of Monaco, and IAF & IAAF president, Lamine Diack.