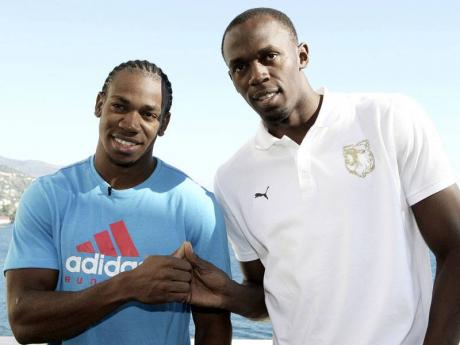 Jamaican sprinters Usain Bolt (right) and Yohan Blake pose for photographers during a press conference, ahead of the 2011 World Athletics Gala Awards in Monaco on Saturday. - AP
By André Lowe, Senior Staff Reporter

World 100m champion Yohan Blake has said that his focus is not to beat his training partner and double Olympic champion, Usain Bolt, but to win important medals, while crediting his work ethic for his improvements over the last season.

Bolt, who admitted last weekend in Monaco that Blake actually puts in far more work than he does and praised the youngster for his strong commitment to hard work, was proved to be right on the money with Blake walking into a press conference a few minutes late, after losing time at the gym at the Fairmont Hotel here.

"I was looking all over for him and one mind told me to check the gym and there he was," laughed Timothy Spencer, a member of Blake's management team.

Blake himself knows the value of hard work and has been putting in the miles with a hope of continuing to achieve his ambitions, which he made clear is not centred around getting the better of Bolt.

"Usain (Bolt) knows me from a long time, since high school and I have really worked hard, and sometimes I have to be told to calm down," Blake laughed. "I know my body can take a lot of work so I try to work and train as hard as possible; that's why he (Bolt) names me 'The Beast'.

"But it's not all about beating Usain," Blake underlined. "I am competing against the world, so my focus is not about beating Usain, because at the end of the day a World medal is what really counts. We are training partners and we have been working hard together, but it's never about beating him, that's not the most important thing."

Blake, who on Saturday received the IAAF award for Performance of the Year for his 19.26 seconds 200m run at the Brussels Diamond League meeting, says he does not feel pressured to match or better his performances this year in 2012, crediting his coach Glen Mills for keeping him grounded and focused.

"We have a great coach in Glen Mills who has done well to prepare us for all of this, so there is no pressure on me at all, I do not feel pressured plus I train with Usain, I can't be pressured," Blake laughed.

Despite that 200m run, which gave him the third-fastest clocking in history over the distance, Blake claims that no decision has been made on whether or not he'll compete in the event at next year's Olympic Games.

"I'm not sure if I'll do more 200 metres this season, it all depends on what my coach determines," said Blake. "As for the Olympics, I am looking forward to it especially because it's in London and there are a lot of Jamaicans in London."