Eurozone ekes out growth in Q3 but recession looms 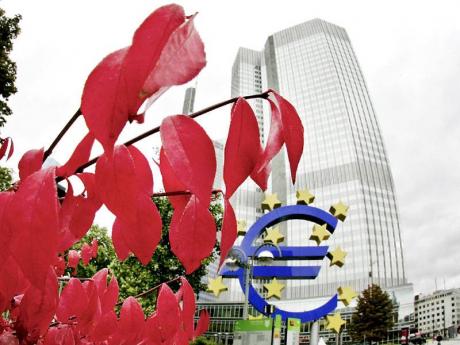 The economy of the 17-nation Euro bloc avoided contracting in the third quarter, thanks mainly to Germany and France, but is widely expected to fall into recession imminently as a result of its raging debt crisis.

In its first estimate for the third quarter, the EU statistics office's Eurostat, said Tuesday that the Eurozone economy grew by a paltry 0.2 per cent for the second quarter in a row.

And that is likely to be as good as it gets for some time, with economists predicting a recession in coming quarters.

Consumers and governments are expected to spend less due to the uncertainty spawned by the debt crisis that is threatening to spiral out of control as it moves from relatively small economies like Greece to much-bigger Italy.

Forward-looking indicators, such as surveys of business managers, households and investors, have all disappointed recently.

"The economic slump will accelerate in the coming months," said Christope Weil, an economist at Commerzbank. "The uncertainty caused by the sovereign debt crisis is lying like mildew upon the Eurozone economy."

The worry is that the slowdown will hurt governments' ability to reduce their debt loads as state revenues shrink and interest payments pile up.

For now, the Eurozone has managed to avoid a recession - technically defined as two consecutive quarters of negative growth.

The data showed Europe's two powerhouses, Germany and France, were still growing - 0.5 per cent and 0.4 per cent - during the July to September period as consumers continued to spend.

Tuesday's figures did not include a number of countries, such as Greece, Ireland and Italy. Their preliminary figures are due later this month, but are unlikely to cause much of a change in the headline rate.

How much longer Germany and France can keep the Eurozone afloat, however, is debatable.

Signs of a looming Eurozone-wide recession were evident in the figures - Cyprus, Portugal and, perhaps most surprisingly, the Netherlands, all contracted during the quarter.

"There is no reason for growth optimism," said Ferdinand Fichtner of the German Economic Institute, DIW, warning that fourth-quarter growth is expected to be much slower as the bite of the Eurozone crisis is felt.

"People are uncertain," Fichtner told the news agency dapd. "That is poison for growth."

When the debt crisis erupted in 2009, Europe's economy was just recovering from its deepest recession since World War II, largely on the back of Germany, the region's biggest economy. Germany enjoyed a boom in exports and improved domestic demand, even as many in the Eurozone struggle in the face of mammoth debts.

The Eurozone's third-quarter performance compared poorly with those of its peers. Eurostat said the United States grew by a quarterly rate of 0.6 per cent, while Japan boomed by 1.5 per cent, though largely because it was making up for lost output in the aftermath of a devastating earthquake and tsunami.

The economy of the wider EU, which also includes Britain and Sweden, also grew by 0.2 per cent.