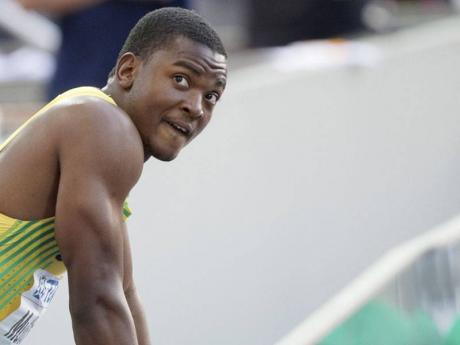 National sprinter Steve Mullings was yesterday found guilty of committing an anti-doping violation and faces a long ban from the sport.

Sentencing has been postponed pending receipt of a document from the Jamaica Athletics Administrative Association outlining the specifics of Mullings' prior violation in June 2004. Sentencing has been set for next Monday at 2 p.m.

"I am not surprised at the ruling today," said Alando Terrelonge, the lawyer representing the athlete. He cited the fact that it was clear once the panel rejected an affidavit that the athlete tried to submit into evidence. He suggested that the matter could be taken to the Court of Arbitration for Sport.

The Jamaica Anti-Doping Commission (JADCO) Disciplinary Panel, chaired by Lennox Gayle and comprised of Dr Japheth Forde and Peter Prendergast, at the hearing which is being held at the Jamaica Conference Centre in Kingston, unanimously accepted the evidence presented by the Jamaica Anti-Doping Commission through its witnesses, Dr Paul Wright, the doping control officer; Dorel Savage, the chaperone who accompanied Mullings while he submitted his urine sample; and Cara Ann Bennett, the results manager of JADCO.

Conversely, Gayle said Mullings did not present any evidence that demonstrates any irregularity at the lab that conducted the tests in Canada, therefore, the analysis of the sample is deemed to be correct.

During the hearing last week, the panel rejected attempts by the athlete to have an affidavit of his testimony admitted into evidence. Gayle, in addressing the matter, explained that when the hearing first began on August 20, specific instructions were given as to the deadlines by which the parties were to submit lists of their witnesses as well as other particulars. Mullings was to have submitted his particulars by October 3 as the matter was to resume on October 19 and 20. A further postponement pushed the hearing to November 8 and 9, and Mullings had until October 28 to file his particulars.

Mullings eventually submitted a list of witnesses that included Dr Paul Wright, Paul Scott, who was his representative at the testing of the 'B' sample on August 16, Steve Dudley and the athlete himself.

"Were the panel to allow the affidavit to be admitted it would become unchallenged (evidence)," Gayle said.

During the period, Gayle said, emails were sent to Mullings urging him to be present at the hearing. He did not respond to the emails, the panel chairman said.

With regard to claims made by Alando Terrelonge that his client was not allowed to give evidence using Skype, Gayle said no formal request was made before the hearing began. He added that when it was made, it was with too short a notice, as the Jamaica Conference Centre was not equipped to accommodate that request, and had sufficient notice been given the proper arrangements would have been made.