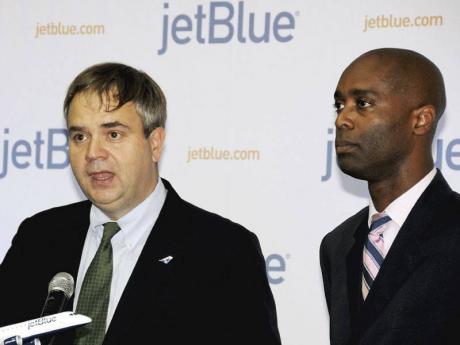 JetBlue Airways is said to have snatched up an estimated 10 per cent of market share in Jamaica in under three years, and plans to double its Kingston passenger traffic to 144,000 next year when it launches a second daily flight to Fort Lauderdale.

The US-based airline also plans to launch a third daily flight as early as 2013, in a move that would equal the number of daily flights offered by home-grown carrier Air Jamaica.

"We are going to continue to grow in Jamaica. We are looking at a third daily flight from Kingston," JetBlue chief commercial officer, Robin Hayes, told Wednesday Business following a press conference in New Kingston on Monday.

The second flight to Fort Lauderdale, Florida, will start April 2012 with an introductory price each year of US$59 (J$5,070).

"The headline should read that Jet Blue will bring about 72,000 more passengers to Jamaica, not that we are spending a certain amount on the route," Hayes said.

He said disclosing costs was difficult as there was no landing slot purchase or acquisition of new aircraft. Rather, the second flight would increase aircraft efficiency by reducing its time on the ground, he said.

JetBlue expects to maintain an 80 per cent passenger load factor, which would easily allow the airline to break even on the flights, Hayes told Wednesday Business.

JetBlue will operate an Embraer E190 aircraft as well as the 150-seat Airbus A320 on the Fort Lauderdale route.

"The plan is eventually to operate the Airbus aircraft," he said of the larger carrier.

JetBlue has operated flights into Jamaica since 2009 and grew its market share from 2.0 per cent to 6.0 per cent over two years, according to Tourism Minister Ed Bartlett.

"In 2011, I have no doubt that will be closer to 10 per cent making them the fastest-growing airline in Jamaica, right now. I want this growth to continue because that means more tourists and visitors," said Bartlett.

JetBlue, founded by David Neeleman, began operations in 2000 from its base in New York. It currently serves 66 destinations in 21 US states and 12 international territories. In July 1999, the airline raised US$130 million in capital and funding from investors such as Weston Presidio Capital, George Soros, and Chase Capital.