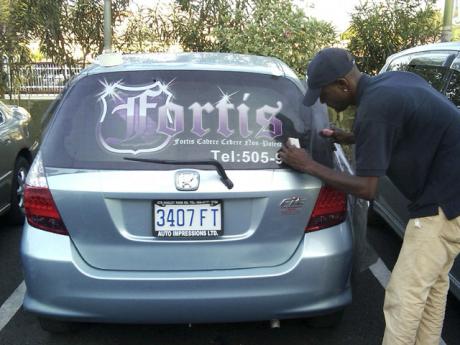 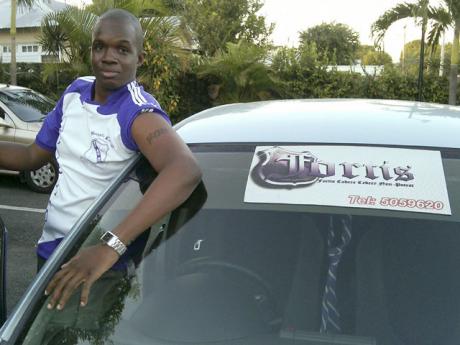 The shirt, the tattoo, the tie and the 'Fortis'... Dariel Stanberry shows his pride in Kingston College.- photos by Mel Cooke 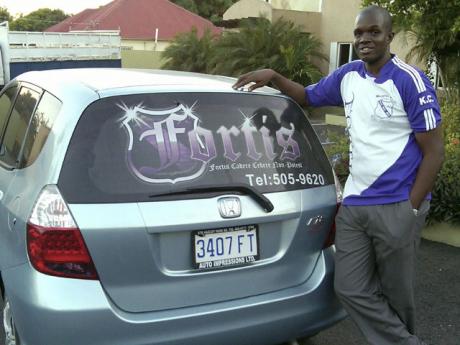 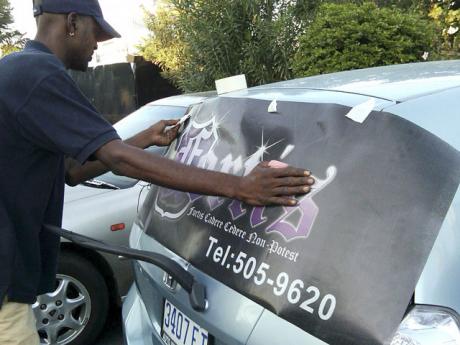 There is no doubting Dariel Swanion Stanberry's commitment to his alma mater, Kingston College (KC).

He has the legendary 'Fortis', from the KC motto, 'Fortis Cadere Cedere Non Potest' (The Brave May Fall, But Never Yield), tattooed on his left shoulder. His purple and white tie, 1994 vintage, is suspended from the rear-view mirror. 'Fortis' is on the windscreen and he travels around with a KC shirt in his car, ready to don at a moment's notice - which he did for Automotives' visit.

However, it is the 'Fortis' on the back glass of his car, purple writing on black, which is the latest, greatest tribute to KC on the Fit. It was applied on Thursday evening by Deswick Risden and Stanberry is sure that it will be "headache in traffic!"

Previously, he had the wording on a white background, but he decided it was not enough. "I said, no, I am working at an advertising firm, let me go big. That is what we are known for," he said.

The design was done by O'Brien Baxter of Red Box Technology, Stanberry choosing from one of three designs.

Stanberry assured Automotives that visibility through the glass is not impaired, as the perforated vinyl used on the badging allows almost the same level as if there was no 'Fortis' design present. The print and application cost between $7,000 to $8,000, Stanberry pointing out that "it can be cheaper. We have it smaller". He makes it clear, though, that this is not a money-making venture - it is done out of sheer love for Kingston College.

"We are a wealthy school in spirit. If we are not wealthy in cash, we are wealthy in spirit. I believe in KC. If I did not go to KC I would not be the man I am today," Stanberry, who was last a student in 1999 (he makes it clear that he has not 'left' KC) said. Among the qualities instilled in him by the North Street, Kingston, high school for boys, he said, are discipline, moral beliefs, team spirit and "we are not a failure. We may lose but we do not give up. Listen to our motto - The Brave May Fall, But Never Yield".

He was a cadet from first to third form and tried rugby in fourth form before turning to the Junior Achievement Club, a business within the school endorsed by the Jamaica Chamber of Commerce (JCC) which produced KC memorabilia - T-Shirts, caps and visors, among other items. Stanberry has taken his school pride abroad to Belgium, which he said he has visited since 2008.

There, in a town named Lotenhulle, the walls of his room are purple and the roof white. There is a KC tie (bought specially for the trip to Belgium) suspended from the door frame and a KC shirt waits for Stanberry to slip on on his next visit. He said when he wears it in Belgium, "they think I play for a bank named Fortis".

Stanberry has his telephone number on the Fortis designs and has had no negative comments. "I have people call and say how KC so boasy. Nobody has called to say take it off," Stanberry said.

The tie has been in several cars before - a 2002 Honda Accord, a 2000 Honda Civic, a Toyota Run X Stanberry had for one week and a 2008 Honda Accord. He plans to go one better in the very near future, to put the Fortis badging all over a white car. "Just think about the Grace and Digicel cars, mottos and all," he said.

He has already identified the purple and chrome rims that he will use, but notes that the Fit will not leave the Fortis family, not with one brother who also attended the school and another in lower sixth form.

The dream Fortis ride will be either a Mazda or Honda and, unlike the Fortis sign on the Fit, Stanberry plans to keep it exclusive for a while. "I think I want to have that car for about a year before anybody else does it," he said.