'Find the Flag' written for Jamaica 50 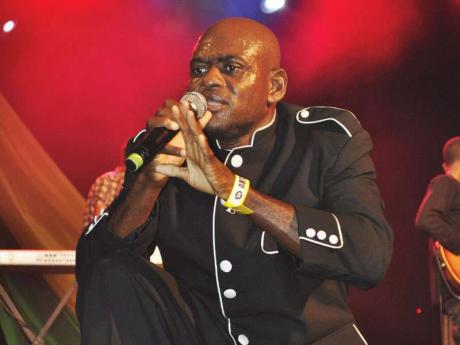 In late October, a slate of activities for the 50th anniversary of Jamaica's Independence - Jamaica 50 - was outlined at Jamaica House, Hope Road, St Andrew. Music was, of course, featured heavily throughout the programme, and established favourites from various genres given good treatment.

There was, however, one new song, Find the Flag, written and produced by Mikey Bennett, with an all-star cast of performers that included Ken Boothe, Freddie McGregor, Konshens, Capleton, Tarrus Riley, Natel, Bunny Rugs, Chevelle Franklin, Vegas, Admiral Bailey and Stitchie, with a spoken introduction by Tommy Cowan. The first verse sets the historical context, with:

"50 years ago someone said we should

And the spirit of our forefathers reminded us we could

Then the chorus encourages:

"Find the flag in your heart and wave it

Let the magic fill your soul

Find the flag in your heart and wave it

Come rally round the black green and gold."

Bennett found the all-important central theme of the song - and the line which gives it its title - in one of the moments where inspiration comes from conversation. He had been approached by the Ministry of Youth, Sports and Culture to do the song and had been mulling the project as he went about his daily activities.

"Every Wednesday I go to this meeting (at the Temple of Light) in New Kingston called 'Continued Conversations That Matter'," Bennett said. At the end of one session "this good friend of mine from Ocho Rios, Roger Williams, we were talking about his son." The young man had finished the CXC level exams and "I asked how he was doing".

Williams replied, "is just last week I tell him to find the flag in your heart and wave it". He continued talking but, Bennett said, "I did not hear the rest of the conversation. I said to him 'you hear what you said?' That is what I am going to name the song'. Of course, he had no idea what I was talking about".

There was a precedence for the flag in the Reggae Boyz song and experience. And the part of the Beijing Olympics opening ceremony, where the field was filled with drummers, had left a lasting impression on Bennett. He brought in the drummer from Black Soil band, two members of C-Sharp, and a member of the band that plays with Shaggy.

In that beginning stage of the recording process some melody came, but Bennett said "we just got the beat down, then the next two or three days I drove around and listened to it in the car. The next push came from his 17 year-old son. "I said to him, 'What do you think about the song?'" Bennett said. "He said those people who are abroad when Usain Bolt win a race, them happy but said, "Write it for them".

"When he said it, the whole formation came in my head," Bennett said. Appropriately, those who have left 'yard' get a look-in on Find The Flag:

And those who may have flown so far away from home

To every corner of the world

There's something tugging at your heart string, and there are memories filling you with pride

He called for the writers, Steve Golding and Karel Wilson. These are people, he said, who even if they do not write a line by saying what should or should not be included, they contribute. "If they were not there, it would be a different song," Bennett said. "We sat down and in about two hours the lyrics came." Sanjay was called to write the deejay part and "him set up the lyrics. In a way, the deejays understood what we wanted".

The recording process was a good experience; Marcia Griffiths recorded twice because the first time, she said, "me no like how you face look". Beres Hammond did his vocals at 2 a.m. Bennett did not think that McGregor would be able to do it at an 8 a.m., session but, "he said give me half-hour let my voice warm up". It did and Bennett was reminded once again why "he is one of the great singers".

Ernie Smith did his part in Ocho Rios, Rugs in Miami, Capleton put out his all and gave the energy that was required. "He understood the role we wanted him to play," Bennett said. Everyone involved in the creation of 'Find The Flag' has volunteered their talent and time.

He points out that as a songwriter there was a challenge. "This is the 50th. I wanted something that could move from ska to rocksteady to reggae and dancehall seamlessly. We wanted something that put people in a celebratory mood," he said. So he asked the persons recording to imagine they were at the National Stadium and thousands of people were waving their flags. There was also the issue of keeping the melody - which had been carefully worked out - consistent, as many of the performers have their own styles and pet phrases. Bennett said that "95 per cent of the melody you hear now is the same as the demo".

"Every time we spent a couple hours on the song we felt it had improved ... . We Are the World set a standard for these things. This is Jamaica, but that was not far from your mind," he said.