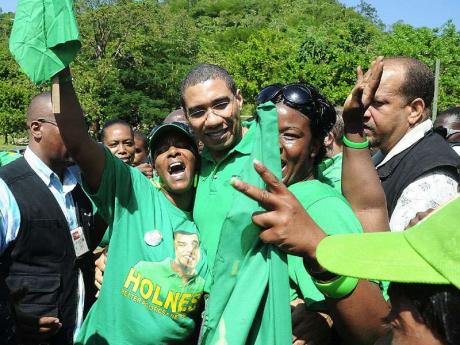 Bill Clinton allegedly remarked that "politics is about polls and focus groups", and it certainly worked for him. Mr Clinton's research-based ability to 'feel their pain' created a bond with the American people that even Monica Lewinsky never broke, and he remains the most popular president since Ronald Reagan.

Whether his Jamaican counterparts take such a scientific approach to politics, I can't say. One problem is that our pollsters are few, and have a mixed record. The Stone polls were extremely accurate for every general election between 1976 and 1997, but went astray in 2002.

In terms of margin of error for the overall voting percentage divide for the major parties, the Wignall polls were off in 2007, as was Bill Johnson in both 2002 and 2007, even though he got the 32-28 seat count correct. The Boxill polls debuted in 2007, but were not on the mark. Only Don Anderson's final polls were within the accepted three percentage-point margin of error in both 2002 and 2007. (See Table 1)

These are only the final 'election call' numbers. The polls during the campaign run-up are less well remembered, and yet often play a key role in raising or lowering party morale and, more important, getting donors on board. This is where our paucity of pollsters becomes a problem. With dozens of polls in the United States, no one or two or three polls overly influence anyone. Indeed, an overall average generally outdoes any individual poll.

Anderson on the money

But the average of the 'election call' polls in Jamaica was not within the margin of error in 2002 or 2007. And while the Anderson polls were on the money both times, a data set of only two points must always be treated with some caution.

Still, the Anderson polls have to be currently considered the most accurate, so it is worth looking at their trends in the 2007 and 2002 election run-ups. (See Table 2)

In both elections, the Jamaica Labour Party (JLP) support lagged at the start and increased as the election drew close. In 2002, the JLP made up 3.7 percentage points in the last week. In 2007, the JLP gained 3.6 percentage point in the last week, and 7.2 percentage point in the last six weeks. There are all kinds of possible reasons for such results. One is just random variation. Another is that the JLP was not in government, and the undecided may have broken more strongly for the Opposition. Or maybe Labourites make up their minds later. Again, two data sets are not enough for any firm conclusion.

Here are the latest published 2011 polls. (See Table 3) They average out to a 2.5 percentage point People's National Party (PNP) lead, within a three per cent margin of error, suggesting that neither party can be totally confident about winning the next election.

Anderson gives Andrew a net favourability advantage of five per cent over Portia, compared to 16 per cent for Johnson, an 11 percentage point difference. Yet, their party standings differ by only (4.6%-3%) 1.6 percentage point. This is way outside any margins of error, and makes no logical sense.

In November, the JLP had an eight percentage-point advantage for 'better leader', and both parties were tied for 'better party to govern'. This averaged to a four percentage point JLP advantage. Yet, the PNP had a three per cent 'Which party would you vote for' advantage. This suggests some kind of internal contradiction.

These polls were taken in mid-November, before both the JLP conference and the JDIP scandal bursting into prominence, and may already be out of date.

As to the massive JLP crowd, probably the largest party conference gathering since 1980, the jury is out. A mediocre turnout after the 'Crown Prince Andrew' hype would have pointed to Labour weakness on the ground. But while the huge throngs showed an energised JLP, big crowds have not been any great indicator of electoral success ever since 150,000 strong proved Michael Manley wrong in 1980.

The Jamaica Development Infrastructure Programme scandal, which to their credit PNP spokesmen kept warning us about, would appear a big blow to the JLP. Former Transport Minister Mike Henry and National Works Agency boss Patrick Wong are guilty of either rank corruption or blundering incompetence, and have both rightfully been booted out.

Normally, such revelations so close to an election would badly hurt the party in power. But because Prime Minister Andrew Holness has held office for less than two months, it has not damaged him personally. In fact, his swift dismissal of the two men in charge has won him kudos from the public for decisive leadership. It's definitely more than the 'youthful exuberance'-type slap on the wrist we've become used to.

Yet, he needs to do more than this to convince the public he really is different from his predecessors when it comes to protecting the public purse. So I bring to his attention a November 3, 2011 Gleaner article titled 'PM Holness seeks to tackle public contracting'.

'Prime Minister Andrew Holness will shortly be meeting with Contractor General Greg Christie to discuss issues of concern regarding public contracting in Jamaica.

'In a letter dated October 24, Christie had written to Prime Minister Holness indicating that his office "stands ready to discuss with you ... the hopes of my commission".

'The Office of the Contractor General (OCG) boss will place on the agenda the "pervasive perception of corruption in public contracting in Jamaica".

'He will also highlight several recommendations made by his office to significantly enhance transparency, competition, accountability and probity in public contracting, among other proposals.

"...Your expressed willingness to meet with me is welcomed, particularly against the background of the public commitments that you have recently made to tackle corruption in Jamaica, to ensure public transparency of the decisions of your Government, and to be open with the Jamaican people," Christie said.'

Well, PM Holness, that "will shortly be meeting" was over a month ago. Yes, you've been busy since assuming office. But now is the time to start living up to your promise by visiting Mr Christie, and showing us you are willing to go the full 100 with him towards cleaning up Jamaica.

In fact, you should start by asking to him to rethink his planned resignation. For in the gloom of corruption enveloping this country, the public sees Mr Christie as a shining star we cannot afford to lose at this time.