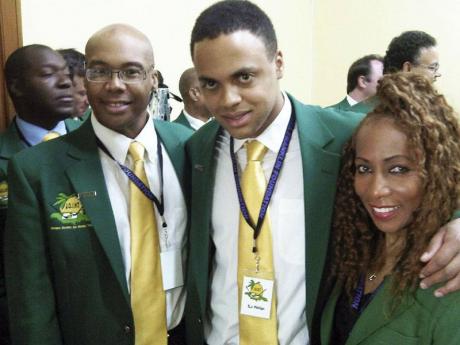 From left: G. Webster Smith, Edmund R. Phillips and Sandra Lord pose after their meeting with members of the Jamaica Olympic Association (JOA) at the offices of the Sports Development Foundation on Tuesday. The three are members of a delegation seeking affiliation with the JOA with the intention of sending a Jamaican ice hockey team to the Winter Olympics in Moscow, Russia, in 2014. - Photo by Leighton Levy

Jamaica is well set to field an ice hockey team at the 2014 Winter Olympics in Moscow, Russia.

Through the efforts of the Jamaica Olympic Ice Hockey Team (JOIHT), a non-profit organisation based in Colorado, which on Tuesday received the endorsement of the Jamaica Olympic Association (JOA), this Caribbean island will assemble a squad of highly skilled players of Jamaican heritage who currently play all over the world.

"What they need to do now is to properly form a national federation, write to us for approval and request affiliation to the Jamaica Olympic Association," said Don Anderson, vice-president of the JOA. "Once everything is on order we will give them our blessing."

Inspired in part by the Jamaica bobsled team, the JOIHT is planning what they have described as an unprecedented undertaking to bring much-needed diversity to a sport dominated by other cultures. The idea is the brainchild of 22-year-old Edmond R. Phillips, whose parents were born and raised in Jamaica.

Born in Columbus, Ohio, Phillips took an interest in ice hockey at the age of seven and has been playing for 16 years. Now a level-four coach - a step below the National Hockey League stage - Phillips, who has been coaching for about five years, co-founded the JOIHT along with G. Webster Smith, the first-ever black American to become a Master-rated coach by the Professional Skaters Association.

In 2010, Smith was head coach of the Icelandic national team of the Bjorninn Skating Club, inspiring his students to winning Iceland's first-ever international medals at figure skating.

A delegation that comprised of Phillips, his father, Webster Smith and several keys strategists and advisers, including Willie O'Ree, the National Hockey League's director of youth development and ambassador for NHL Diversity, met at the offices of the Sports Development Foundation (SDF) with Anderson, Major Desmon Brown and Sports Minister Olivia 'Babsy' Grange seeking the endorsement of the JOA. So far, they were heartened by the response.

"It's been amazing. We had Devon Harris here with us from the bobsled team and he was telling us how when they first started, nobody took it seriously, but it's been different for us. When we talk about this with people, everyone's been so supportive of us. They remember the bobsled team and they have been so encouraging, we have support that has been beyond our expectations," said key strategist Sandra Lord, who grew up in St Lucia as a music celebrity, but who is now known for her work with the Hollywood Networking Breakfast and Hollywood Global Entertainment Network, among others.

"This all fits into my vision of Jamaica being a strong participant in the Winter sports and participating in the Winter Olympics," said Grange. "We have done well with the bobsled team. Although we didn't win we created a stir across the world. With this ice hockey team we are really poised to make a strong statement."

Lord agrees, saying there is a large enough pool of ice hockey players of Jamaican heritage that can be drawn from to create the team that would represent the country in Moscow.

"You would be amazed at how many amazing Jamaican hockey players there are from all over the world, whether it's Canada, Switzerland, England, the United States, and even some budding ones here," she said.

The JOIHT will not require financial support from Jamaica's already cash-strapped coffers, but have budgeted that to achieve their goals it will cost about US$1.7 million, money that they claim they are well on the way to acquiring.

"We have some funding sources in place. Members of our team are on the boards of major banks in the United States. We have celebrities, we have sports figures. We just spoke with a prominent Jamaican hockey player in Canada who has pledged his support. We have so many people who are willing to come on board financially, and we are also going to make Jamaicans all over the world be part of it, if they want to contribute."