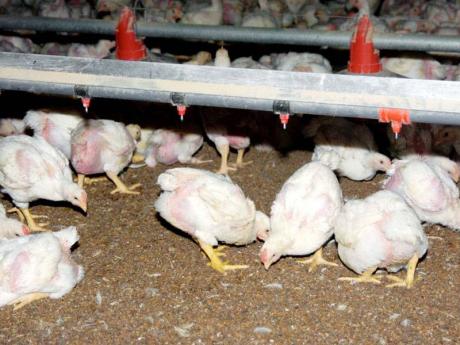 Chickens reared at facilities such as the Jamaica Broilers' plant in Spring Village, St Catherine. - File

The Jamaica Broilers Group has registered a nine per cent reduction in net profit for the quarter ended October 2011, despite increased revenues, but on the back of challenges with higher raw material costs, as well as competition from imports, resulting in a glut in the local market.

The company's volumes were down eight to 10 per cent as a result of the imports, but Christopher Levy, chief executive officer of Jamaica Broilers told the Financial Gleaner they were working with the Ministry of Agriculture and Fisheries to control and manage the imports.

"We experienced significant increase in the cost of corn, one of our primary imported raw materials, with prices surging from US$4.50 per bushel last year to US$7.75 per bushel in this quarter, a 72 per cent increase," the company reported in its second-quarter financial results.

Despite the decline, however, the company saw a 21 per cent improvement in the group's turnover to $5.8 billion, up from $4.8 billion for the same period in 2010.

Although the higher cost of raw material was passed onto consumers, it was not enough to counter increased expenses in other areas and high level of imports, which led to a fall in the company's poultry sales.

"The upward movement in our selling prices was unable to offset the raw material and fuel cost increases, and coupled with higher levels of imported poultry, we experienced a reduction in poultry sales," the company said in its financial report.

Jamaica Broilers, a 53-year-old company, has, since inception, diversified its business into feed milling, cattle rearing, beef production and fish farming, along with the development and marketing of other value-added products for local consumption and export.

It now operates several divisions, including Best Dressed Foods, representing its poultry business, which was impacted negatively during the reporting period along with Best Dressed Feed Mill, its Content agricultural products Hi-Pro/Ace Farm & Garden Supercentre, as well as its ethanol operations which involves the processing and sale of fuel-grade ethanol.

Jamaica Broilers controls about 40 per cent of the local chicken market, processing about 12,000 chickens per hour, or about 100,000 per day.

Its closest rival, Caribbean Broilers, handles up to 80,000 birds per day, taking control of about 35-40 per cent of the market.

The company said that although they were operating in a difficult market environment they continued to secure ethanol-processing contracts, contributing to the overall earnings. Jamaica Broilers have ethanol assets worth $3.6 billion.

Jamaica Broilers reported that distribution and administrative cost went up quarter-over-quarter by $4 million, due partly to its build-out in Haiti and the wider Caribbean.

Last year, the company announced its intention to go after a bigger part of the export market through distribution deals in several countries.

Its investment in Haiti continues with the distribution of animal feed and baby chicks to that country.

"Our investment in Haiti continues to grow and develop," said Levy, adding that "it's interesting time as we work to build an industry over there, which we think have the potential to broaden Jamaica Broilers' base."

Jamaica Broilers, which last traded at $5.75 on the Jamaica Stock Exchange, reported a reduction in finance costs to $77 million from $99 million, but there was an increase in other operating expenses. The company attributed the increase in other operating costs to a write-down of $48 million on investment in one of its subsidiaries as a result of volatility in the global financial markets.