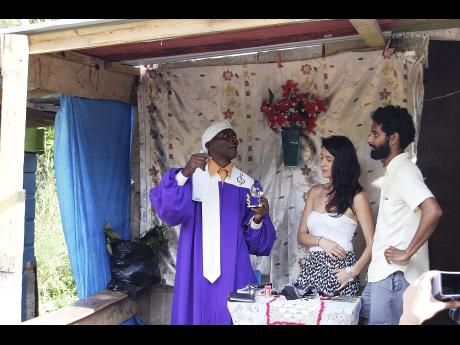 WALDERSTON, Manchester: A CREW from Vice Media Inc out of New York last Sunday journeyed to Walderston in Manchester to interview an obeah man called Joseph. The spiritual healer had got international recognition through an interview by The Gleaner's Robert Lalah in his series Roving with Lalah.

Vice Media's interview with Joseph was used as a medium to promote the new 2013 Mini Cooper S Roadster soft top and hard top series. The cars made the trip to Jamaica for the promotional series called 'All The Wrong Places' where they carry the cars around the world looking at some unusual happenings in the respective countries.

Codine Williams, a Jamaican by birth, co-produced the show with Mariah Wilson. As Williams explained, "We got this contract to do a car promotion for Mini. We literally went around the world figuring out how folk magic impacts the various cultures. We went to South Africa, Japan, Peru, and Sweden prior to coming to Jamaica."

Williams added: "When re-searching, Joseph's name came up a lot through interviews by The Gleaner, so we decided to come down and interview him. He practises white magic, which we are interested in. We aren't interested in the evil aspect but the good aspect of it, which is what he does.

"Our company has an interest in how people interact with unusual things, and we know that folk magic, or obeah, is a big part of the Jamaican community. Some see it as being something wrong, but we do believe that there is something good in it."

Joseph, christened Joseph Walder, was interviewed by co-hosts of the show, Krishna Andalovu and Natalia Sanchez.

It was a very funny and interesting affair, with Joseph enlightening his hosts on the mysteries of white magic. He took them through how he received his powers, which he said were inherited from his mother, who could 'see things'.

Joseph also differentiated between the evil obeah men and spiritual healers. He defined himself as the latter. "I do a lot of good for people, help them. If anyone come here wanting me to harm people, I run them away."

There was a great deal of excitement as Joseph read the cards for his hosts, as well as foretold their future while looking into his crystal ball. He also shared his experience of frequently seeing extraterrestrials.

Joseph took the hosts to a section of his barn yard, or his office, as he calls it, and administered protection, or 'guard', on Krishna by reading scriptures from the Bible and rubbing 'protection oils' on his forehead and other sections of his body.

Joseph also gave Krishna an array of herbs, including guinea hen weed, for various ailments which might afflict him.

A focal point of the show was the Mini Cooper S Roadster, a first in two-door convertible Minis which the crew drove down to Walderston. The cars will be on the market in January and will be available in Jamaica in April.

In culminating the shooting of the show, the hosts asked Joseph to bless the car so that no harm would come to it, which Joseph did by administering some 'protection oil' all over the car.