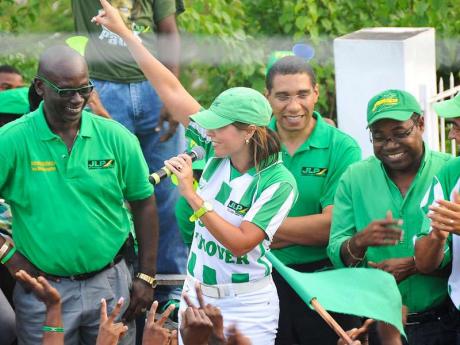 The smiles on the faces of (from left) Desmond McKenzie, Paula Kerr-Jarrett, Andrew Holness, Ed Bartlett and Christopher Tufton, seen here campaigning on December 9, have been erased by the wave of orange. - File 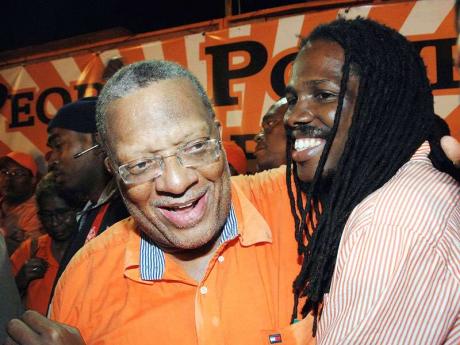 She never needed to read from a piece of paper, and even if she did, it didn't go according to script. We all guessed, calculated and surveyed, but in the end we were all wrong.

On December 29, 2011, the Peoples' National Party (PNP) had a landslide victory in the general election, capturing 41 of the available 63 seats, leaving a mere 22 for a stunned Jamaica Labour Party (JLP) which is probably still looking for the licence plate of the truck which hit it.

Most incredulous is the youth arm of the governing party, G2K, which, given all the aspersions and attempts to malign the press and polls, still did not believe it when it read headlines and saw photos on December 30. Well, let me take this opportunity to advise this set of youngsters that criticising the findings of pollsters is one thing. But disrespecting pollsters and media analysts who attempt to be objective is an extremely dangerous proposition.

Pollster Don Anderson was vilified by G2K in an email dated December 28 because he predicted that the PNP would have won a close 34-29 seat victory over the JLP. All pollsters were wrong. Professor Ian Boxill and his team showed the slimmest of margins to the JLP, but an uncommitted dead heat, and The Gleaner's own Bill Johnson forecast a similar result, with 38 per cent saying they would vote for the PNP while the JLP's support was 36. Unfortunately, The Gleaner team predicted a 34-29 ratio for the incumbent JLP.

Blind with rage and the folly of youth, G2K declared a "40-seat victory for the JLP, using a mix of constituency polls and comprehensive organisational analyses". Undaunted, G2K continued, "The mere fact that Don Anderson ridiculously labels Ken Baugh and Joan Gordon-Webley as being vulnerable only reinforces the sheer inaccuracy of his 'data'." Painting Anderson in orange graffiti, the youths in green suggested that "the Don Anderson poll that wishfully has the PNP winning the election was done for the PNP ...". I am not sure what type of condiment the G2K will use to eat its words, but given its lack of judgement, it is likely to mistake the uncomfortably bright orange spicy Scotch bonnet peppers for sweet green bell peppers.

In fact, it can get worse, and they should pray that the recounting of some of the marginal victories does not leave them in the teens. Big-wigs Ed Bartlett's 179-vote margin, James Robertson's 253, Ruddy Spencer's 86 and Christopher Tufton's 101 could all reverse in recounts.

The loss for the JLP is the result of a major gamble by the party on the whole and individuals within it alike. With a 'bird in the hand' one full year left in its term, it could and should have done its best to come clean regarding the relationship with the International Monetary Fund (IMF). Given that Jamaica took its first dose of eucalyptus oil from the IMF when Prime Minister Holness was a mere infant, the voters with sense knew that we had bitter medicine to swallow, and it was more likely castor oil than the cough medicine.

Young Holness had the opportunity of using the remaining year to distance himself from the Manatt-Dudus debacle and Jamaica Development Infrastructure Programme (JDIP) and take decisive action. If sold properly, his 'reform of the public sector' austerity measures, especially if he incorporated the trade unions and earlier alienated teachers, could have been swallowed. No logical Jamaican believed that the next 12 months were going to be easy. Thus, if he were clear and unambiguous, instead of being evasive, he might have had a chance.

Furthermore, as he prepared to prance on the platform and announce the election date, he should have had his facts well-rehearsed, so that he could have come across as the fresh, young politician who has ideas about how to run a country. Instead, he chose to ad lib and forgot his lines on stage, giving fodder to the PNP-directed short film, 'Duppy Stories', as he improvised facts.

Nevertheless, the task given to Holness was perhaps unfair. A mortally damaged Bruce Golding jumped ship with a full lap left, and a man who, by his own admission, was peripheral to the most important decision his party/Government made was thrust into the driver's seat, with a load of expectations. A bright young man, but not the most erudite, experienced or competent, Holness was given the awesome task of reversing the negative public image of the party and taking it to another term in Government. All of this with little real preparation.

Ironically, it is Holness who had the least to lose. At 39, he is guaranteed a pension equivalent to the salary of any current prime minister. However, there are some who gambled high-stakes poker. Six gave up American citizenship and only three got elected. One gave up a cushy top civil-service job as well for the possible position as member of parliament (MP) which, even if successful, would have only paid a fraction of his previous wages. Even for the three who will now sit on the opposition side of Parliament, the salary of MP can hardly substitute for the ministerial privileges they lost.

It will be interesting to see what happens with the erstwhile trade unionists of the Bustamante Industrial Trade Union (BITU) who virtually turned their backs on the Jamaican worker as they got elected. At the top of the list must be Rudyard Spencer, whose advocacy for workers seemed to crash into the wall of political expedience and vindictiveness as he interdicted the worker representative from his ministry for speaking out on what can be defined as an industrial dispute. As a unionist, Spencer would have been so annoyed that he would have defended her all the way to the Public Service Commission.

Next is Dwight Nelson, whose short- to medium-term memory is so poor that he might not even recall what it was like to serve workers. Finally, Pearnel Charles did indeed do something for workers. He pushed legislation which gave individual workers access to the Industrial Disputes Tribunal and put restrictions on employers who wanted to use redundancies as tools of exploitation. These two initiatives are the best legislative moves made by any labour minister since the 1970s.

However, at 75, he must be dyeing to stop trying to push back the years and finally retire.

Alas, with 20/20 hindsight, poor Andrew must be kicking himself or hitting himself with 41 fists. After all, if one must lose an election, why not ride the wave for the complete journey and not get off the surfboard until one reaches the beach? Add to that the short sojourn in the royal palace and the first sunset he sees after the election results must have ushered in the worst Sabbath of his life. Selah.

Yet, Holness should have paid attention to history. He could have followed our first prime minister, Alexander Bustamante, who was elevated to the post at 78 years old. But though Bustamante is often typified as an idiot, he was shrewd and a wit. Andrew is half that age. History also taught that incumbents never lost December elections, but only if held before Christmas. And finally, no Government which took on the press in this democracy ever won the next general election.