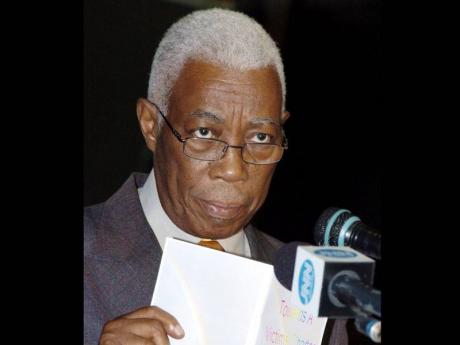 The incoming People's National Party (PNP) administration will be moving to have the Caribbean Court of Justice (CCJ) serve Jamaicans in both original and appellate jurisdictions in time for the 50th anniversary of Jamaica's Independence in August.

Minister of justice and attorney general in the last PNP administration, A.J. Nicholson, is expressing confidence that the Opposition will come on board to give both Houses of Parliament the required two-thirds support to make this a reality.

If the Government gets its way, the United Kingdom-based Privy Council would be replaced by the CCJ, an accomplishment for which the P.J. Patterson administration had toiled, but which was sternly rejected by the Edward Seaga-led Opposition Jamaica Labour Party (JLP).

Nicholson, who was one of the chief proponents of the CCJ in the Patterson administration, suggested that his optimism was based on the JLP softening its position in recent times.

"As the (PNP) manifesto has said, we intend to carry on the move towards Jamaica subscribing fully to both jurisdictions of the CCJ," said Nicholson. "We are now a part of the original, we want to be a part of the appellate jurisdiction as our final court of appeal."

He said that despite the need for two-thirds support in each House of Parliament due to the requirement for the CCJ to be entrenched in the Constitution, he felt it was quite possible to meet an August deadline.

"The truth is, what is needed for us to do that is to have the cooperation of the Opposition in each House of Parliament," Nicholson said.

"They (the Opposition) had softened their view somewhat in the latter part of their administration, saying that they would engage in talks to see how we could best achieve that goal."

He said those talks, which were curtailed by the impending election, were expected to be continued.

"We are more than hoping, we are expecting that the present Opposition will now come on board for us to do something which should have been done a long time ago. We expect that."

Nicholson added: "The present Opposition would be showing good faith in both of us moving off together and making brand new pledges for our 50th anniversary; the stonewalling must stop."

The CCJ was established in 2001 as the judicial institution of the Caribbean Community (CARICOM) with two jurisdictions - original and an appellate.

In its original jurisdiction, the CCJ interprets and applies the Revised Treaty of Chaguaramas (which established the Caribbean Community), and is an international court with compulsory and exclusive jurisdiction in respect of the interpretation of the treaty.

In its appellate jurisdiction, the CCJ hears appeals as the court of last resort in both civil and criminal matters from those member states which have ceased to allow appeals to the Judicial Committee of the Privy Council (JCPC).

Barbados, Belize and Guyana have replaced the JCPC's appellate jurisdiction with that of the CCJ. As of 2011, two of CARICOM's more vibrant and larger members states - Jamaica and Trinidad and Tobago - had failed to come on board due to political disagreements within their borders.