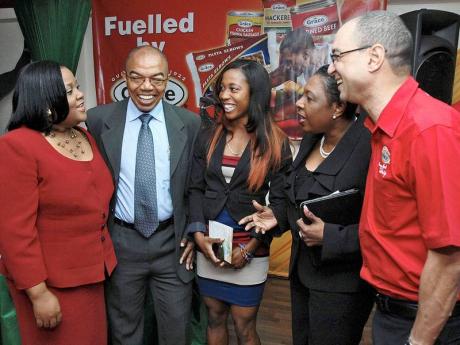 Jamaica's participation at the London 2012 Olympics will be fuelled by Grace Foods and Services, as they have signed on as official nutrition sponsors of the Jamaica Athletics Administrative Association (JAAA) with a commitment to donate a minimum of $5 million to the association, as well as provide nutrition education for athletes.

The partnership deal, which was announced by GraceKennedy's CEO Don Wehby yesterday at the company's head office, located at 73 Harbour Street, downton Kingston, will see the Jamaican populace playing a big role in the final amount of money that is given to the association, which can exceed $5 million, but will be no less.

As of yesterday, through to June 2012, Grace Foods and Services will donate to the JAAA 10 cents from the sale of every can of Grace vienna sausages, Grace five-and-a-half ounce mackerel, Grace corned beef, every pack of Grace franks, every ounce of Grace tropical rhythms, Grace cock soup and Grace tomato ketchup.

"From the sale of these (items) - our most popular products - we are happy to pledge a minimum of $5 million this year to the JAAA, so the more you buy is the more we will contribute," Wehby announced.

"I am also delighted to announce that with the support of our well-respected food nutrition lifestyle consultant, Dr Heather Little-White, Grace Foods and Services will partner with the JAAA to provide nutritional education and meal planning to the athletics community across Jamaica," he added.

JAAA president, Dr Warren Blake, revealed that the support for Jamaica's Olympic contingent by GraceKennedy, which is also broadcast sponsors for the 2012 Olympics, will transcend to the athletes' village to be based in Birmingham, England.

"Grace Foods will also assist with the preparation and provision of meals at our pre-Olympic training camp in Birmingham," Blake shared.

"This will remove the problem that some of our athletes had in Daegu, of eating culturally diverse foods. In fact, it was the reporting of these complaints that led to the initial discussions that culminated in this agreement," he added.

Blake further outlined that the success of the nation's athletes on the global stage can serve as a unifying and inspirational force for the nation is this our 50th year of independence. hence, he appealed to Jamaicans to support the venture by increasing their purchase of the Grace Foods brands.

"I also call on other corporate groups to contact the JAAA and explore the possibility of entering into mutually beneficial relations with us and adding value to their brands," Blake expressed.

Minister without portfolio in the Office of the Prime Minister, with responsibility for sports, Natalie Neita-Headley, who was making her first official appearance at an official sports function since taking up office in the newly elected Government, threw her full support behind GraceKennedy's initiative.

"I am confident that this initiative will be successful and I enthusiastically and unreservedly endorse the programme, as I believe it can only serve to enhance the performance of our athletes and help to propel our country towards becoming a health-conscious nation," she said.

Former minister of sports, Olivia Grange, charged other corporate entities to get on board and support the programme.

"I hope that other corporate entities will see this as the signal to move off the mark and get going, because the summer is not so far off and ... it is crucial times," Grange said.