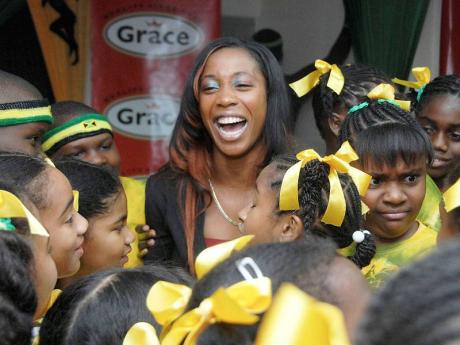 Reigning Olympic 100m champion, Shelly-Ann Fraser-Pryce, has for years toyed with the 200m, but has never run it at a major championship.

However, she looks set to tackle the sprint double at the 2012 London Olympics slated for July 27 to August 12.

Fraser-Pryce, who has a personal best 22.15 seconds over 200m, admitted to The Gleaner that she wants to run the event.

"Yes, I want to do the 200 metres," Fraser-Pryce expressed. "The likelihood is there, I can't tell you if I am a 100 per cent sure, but it is something that is in the talks between me and my coach.

"I am definitely looking forward to doing the 200m and qualifying for it at the national trials, then look forward to it at the London Games," she added.

The 25-year-old only managed a fourth-place finish in the 100m with a time of 10.99 seconds at 13th IAAF World Championships in Athletics last season, but she is not overly disappointed with that performance as she was plagued by injuries.

"Last year had its ups and downs. I came fourth and it was a little bit disappointing, but not so much because considering the year I had with a back injury and calf injuries, it was really a tough year for me," Fraser-Pryce shared.

"But I was still able to go to the World Championships and be a part of that final and come fourth, so I have to give God thanks for small mercies. Not every day you are going to get up and win, but defeat will make victory even sweeter," she stated.

The University of Technology student is pleased to report that she has no major injuries at present and training has been going very well.

"It is my last semester in school, so it is a little bit hectic, but I am working hard, I am focused and I am determined," Fraser-Pryce stated. "I am just making sure that 2012 will be a year in which I am really healthy and just do my best when it counts."

The MVP athlete intends to continue doing work on her world-renowned 'bullet start', but does not rule out adding to her arsenal.

"Any tweaking or new thing that will be added will be up to my coach and will be taught in training, so I look forward to that," Fraser-Pryce expressed. "But I think I will still be working on my start because that is a plus for me."

Fraser-Pryce commended America's Carmelita Jeter for the wonderful season she had last year, which was highlighted by her gold medal run in the 100m at the World Championships. Jeter also took silver in the 200m. Fraser-Pryce was, however, quick to highlight that she has "also been there" before and will be back.

Fraser-Pryce is set to open her season on the January 28 at the Grace Jackson meet, where she will be running the 400m.