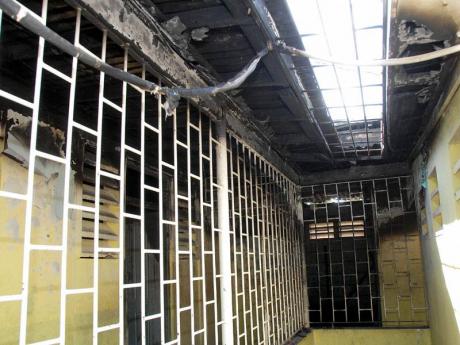 A burnt-out section of the dorms at Glenhope Place of Safety in St Andrew. - File

An estimated $55 million will be needed to refurbish and rebuild the Glenhope Place of Safety in Maxfield Park, St Andrew. Last November, the facility was extensively damaged by fire, forcing its closure and the relocation of its wards to a number of other childcare facilities.

Rashida St Juste, public relations and communications manager for the Child Development Agency, said the fire severely damaged four of the dormitories as well as a classroom block. Some of the dorms also suffered extensive water soak, rendering them unliveable.

"We are not just going to be renovating the facility, but we are also planning to do some structural changes. We are looking to re-roof and redesign the roofing structure, as well as build a multi-purpose recreational area, because there was none before," St Juste told The Gleaner. "We are also looking at refurbishing the sickbay. These are some of the things we have to do before we can actually make the place liveable again."

The home, which housed girls between the ages of 12 and 18, was announced as the fund-raising project for this year's National Leadership Prayer Breakfast, which was launched yesterday at The Jamaica Pegasus hotel in New Kingston.

St Juste said she hoped that they would receive the funding needed from whatever organisations and individuals that could assist in order for the work to be completed and have the facility reopen within six months.

"We really need that place of safety up and running because we have children that when they are placed in the system, they will need suitable temporary housing, pending the outcome of their case. So it is an essential facility," she said.

The new facility is looking to house 42 girls, which will be fewer than the approximate 70 that were there before.