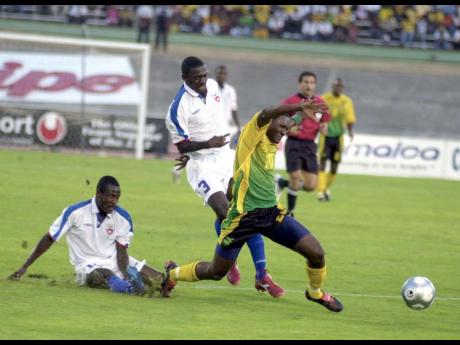 Former Jamaica international-turned-agent Damani Ralph (right), who holds the MLS rookie scoring record with 11 goals, in action for the Reggae Boyz during a 2006 Caribbean Zone World Cup qualifier against Haiti at the National Stadium on June 20, 2004. - File

Jamaican footballers dreaming of a giant leap to professional clubs in Europe may want to consider a smaller jump towards a league much closer to home.

With tightening admission regulations and finances choking the flow of outside talent to the glamour of the European game, local players are being encouraged to pay serious attention to Major League Soccer (MLS), and use North America's top competition as a stepping stone to their ultimate fantasy.

The improving standard of play and gradual expansion of MLS - up to 19 teams for the 2012 season starting March - offer additional options that favour Jamaican players hungry to start life as a pro. Jamaicans are also being urged to drop their negative stereotype of MLS, which has angered agents trying to recruit local talent.

"People really need to start respecting the MLS for what it is," said former Jamaica international-turned-agent Damani Ralph, who holds the MLS rookie scoring record with 11 goals.

"If you track this league for the last five, six, eight years, the league has improved every year and it's now becoming a feeder league to teams in Europe. And for all the arrogant people back home, and I'll say it because I'm a Jamaican as well, they need to get over themselves thinking how this MLS is a bush league, as you'll hear people say down there."

At worst, Ralph argued, MLS is a huge upgrade from the highest level of football being played in Jamaica. It is also more likely to attract pro scouts.

"Look at the television," Ralph said, "look who's watching this (MLS) league. I don't see nobody coming to watch the (Jamaican) Premier League, and that's not a knock on the Premier League, because that is where a lot of us get our break from."

Some are already finding their way. Striker Darren Mattocks, a former star at Bridgeport High and for two years at the University of Akron in the US, was selected second overall in MLS SuperDraft on January 12. He is guaranteed a lucrative contract and sponsorship deals. After his first year in college, Mattocks was offered a deal with a Danish club. But the grass, according to the 21-year-old Portmore, St Catherine resident, was not greener on the other side.

"MLS right now, it would be a good starting point to catapult my career to the next level," reasoned Mattocks. "So that's why I choose the MLS. So hopefully, in a couple years time, I will move on to Europe."

Top names, like David Beckham, Thierry Henry and Rafa Marquez, have done the reverse and now command millions of dollars each year in MLS. But there is still a huge disparity in compensation for MLS players. Several Jamaicans, who have been key to successful franchises, struggle to approach US$100,000 in annual salary. Others fare far worse.

But Jamaicans are being urged to consider the long-term benefits of playing in MLS. The league is viewed as an avenue to fine-tune players. Plus, options elsewhere are diminishing.

"Europe is going to become harder and harder to get into financially. The world is in a bit of financial crisis and I think football is in a very dangerous situation at the moment ... What the MLS does offer is, one, a stepping stone where players could probably enter a league a lot younger, learn to play the game properly ... It is an option they didn't really have before."

Currently, several Jamaicans, and those linked to the island through family, play in MLS. Reggae Boyz Andy Williams, Omar Cummings, Tyrone Marshall, and Donovan Ricketts have played on MLS Cup-winning teams. More Jamaicans are being invited on trial with MLS clubs. Some players, like Cummings and Shavar Thomas, have tried out with European clubs while contracted to MLS. Not many have moved on so far, but the possibility is there.

"If you want to develop your game, you have to be playing and you want to be playing at a good level," explained Jamaica-born Robin Fraser, a former MLS player now head coach of MLS club Chivas USA. " ... (MLS) maybe not the same money (as Europe), but the money in this league is growing and it's also becoming accepted that this is a good stepping stone to get to even greener pastures."

Some argue MLS is "greener", a better living than staying in Jamaica hung up on a European dream.