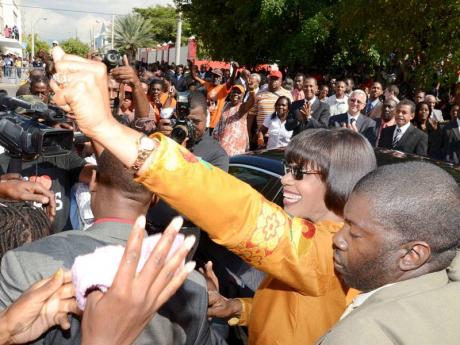 The obvious pride glowed across the faces of the scores of women who came out to Gordon House yesterday to witness their beloved leader, Jamaica's first female prime minister, reclaim her seat on the government benches in Parliament.

In fact, hours before the new parliamentary session was scheduled to open at 11 a.m., People's National Party (PNP) supporters started lining both sides of Duke Street, Kingston, in anticipation of getting a personal greeting from their leader, Portia Simpson Miller, and her 41 members of parliament and 13 senators.

By 10 a.m., the numbers swelled to hundreds, far outnumbering the handful of Jamaica Labour Party supporters at the other end of Gordon House.

Supporters travelled from various parts of Jamaica - Kingston, St Catherine, Clarendon, St Ann, St Thomas - to witness what they describe as "one of the proudest days of our lives".

"A di greatest ting eva happen to me in life," stated Debbie Brown. "A long time we a wait pon this. We tun up di tings. Since mama come, suga drop, light drop. Me stress free. Me couldn't ask fi nutten more than dis right now."

"She is the queen of Jamaica for 2012. Only she alone coulda cross it," said Velma Smith.

Even the youth were overcome with jubilation.

When the lady of the hour finally arrived, their jubilation turned to deafening euphoria.

When she stepped out of the car, she barely got a chance to move an inch, immediately swarmed by reporters, photographers, supporters and children. Her bodyguards were almost shoved out of the way.

Of course, the men were out too, albeit in much fewer numbers than the women.

"Sista P tun it up one more time!" one man shouted as his friends held up a handwritten sign that read 'JLP means Jamaicans Love Portia'.